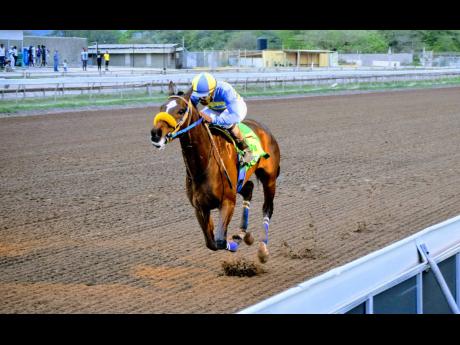 Stomp The Rhythm, with Shane Ellis aboard.

SUNDAY's divided feature for three-year-olds, the Mr Lover Lover Trophy, is being run at a tricky nine furlongs and 25 yards. In division one, SIR TAJAY is the lone runner to have gone around the lawn. In division two, I REALISE and PRINCE SANJAY are the only two with two-turn experience under their girths.

Trip aside, pace will be a major factor in the divided feature for non-winners of two races. Quicker runners such as Jason DaCosta's SUNSET SILHOUTTE could use her pace to dominate division one should she swing into the straight with an unmolested lead.

SUNSET SILHOUTTE did her best in the 1000 Guineas behind runaway winner ATOMICA, straightening fifth, eventually finishing fourth for a final time of 1:41.2. The Guineas pace was a decent warm-up for SUNSET SILHOUTTE, who won handily at seven furlongs, clocking 1:27.3 against maidens in April.

However, UNRULY DUDE, who made all at five and a half furlongs to get off the mark on debut, before diving in at the deep end of the recent 2000 Guineas at a mile, could be a spoiler on the lead for DaCosta's filly, opening up the event for closers such as SLAM and possibly Anthony Nunes' RORAIMA.

SLAM needs the perfect race to catch the leaders, a collapsing pace, which he enjoyed when outfinishing RUM PUNCHER and GET A PEPSI at eight and a half furlongs early May. Though he gets a distance of ground, SLAM lacks pace, which could be his undoing in a two-turn race against horses capable of getting away from him down the backstretch.

RORAIMA has trained really well and could be the fly in the ointment, clocking a bullet 1:00.3 for five furlongs round, followed by 1:15.1 for six furlongs last Monday morning.

In division two, Alford Brown's I REALISE stands out with a six-and-a-quarter length win at the trip on 2000 Guineas Day, June 5. However, he is up in class against the likes of SILENT MISSION, who, though having never gone nine and 25 yards, placed third behind ATOMICA in the 1000 Guineas at a mile. She was also third behind the unbeaten filly in the Portmore Stakes at seven and a half.