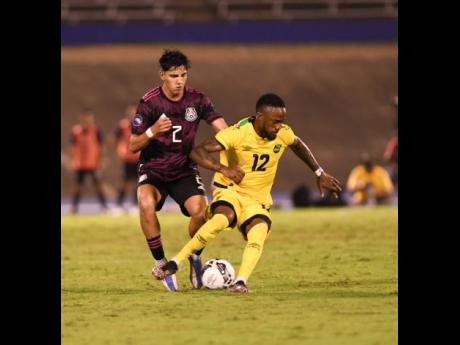 With Gold Cup qualifi-cation secured, interim national senior men's head coach Paul Hall says that he is optimistic about putting pen to paper on a permanent deal to lead the Reggae Boyz into the future.

Hall was speaking after Jamaica drew 1-1 with Mexico in their Concacaf Nations League game at the National Stadium last night. Leon Bailey opened the scoring in the fourth minute but Luis Romo equalised three minutes into first-half injury time, to deny the Reggae Boyz a first win at home against the Concacaf giants in more than a decade. Their last home win over Mexico came in 2008 when Ricardo Fuller scored the lone goal in a 1-0 victory.

It was a result that left Hall disappointed as he felt that they had opportunities to press home their early advantage. With the June window now concluded, questions about Hall's long-term future were asked, as he is yet to sign a permanent deal.

When asked about his contract status in his post-game press conference, Hall said that there are no lingering issues that will prevent him from signing a deal.

"I had a commitment until the end of this game or the end of June. Talks are taking place but there are no sticking points. Hopefully, I will be able to sign a contract soon," Hall said.

The situation comes on the back of Hall reportedly resigning after faulty travel arrangements saw a delay in the players' departure from Suriname following their Nations League opener in Paramaribo, Suriname. The chaos saw them demand the resignation of Jamaica Football Federation general secretary Dalton Wint, which they got the night before their return leg against Suriname last week Tuesday.

When asked about the situation and if his status with the team is safe, he was bullish in his response.

"Yes, why would it not be tenable?" Hall said.

Following overseeing his first regional campaign from the start, he said that he was pleased with how the team has operated in the June window. However, he was disappointed about letting a major scalp slip by conceding right before the end of the first half, which he put down to a lapse in concentration.

"The team is on a journey and the team needs to go forward. Mexico changed their squad from what it was the last time. Yes, I am happy with the way things are going in this cycle but I could have done without that goal happening just before half-time," Hall said.

Jamaica still have a one-point lead in their group with five points, while Mexico are on four. They will face each other next year in the group decider in Mexico.