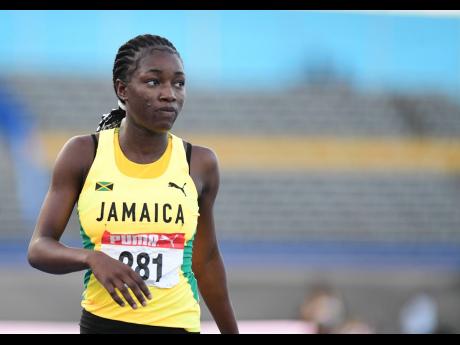 Jamaica’s Samantha Pryce after winning the Girls U20 3000m race at the Carifta Games in Kingston on Sunday, April 17.

After more than a month and half in the United States recovering from a broken leg, Holmwood Technical distance runner Samantha Pryce says she is eager to return home.

Pryce, 19, broke her left leg after she was tripped on the first leg of the final of the Championships of America 4x800m event at the Penn Relays in Philadelphia, Pennsylvania, on April 29.

Pryce, now in a private home in Philadelphia concentrating on physiotherapy, underwent surgery on the same night of the injury.

She says that her recovery has been going well.

"I am feeling great right now because everything is getting back to normal, I feel like I am getting back into shape," Pryce said.

"Things are going fine with my therapy, but I miss home and my family, but I have to stay here to get therapy so that I can be fully recovered from this injury, because I still don't know when I am coming home yet."

Pryce says that the injury is healing much faster than she had expected as she is now able to walk without crutches.

"I thought it would have taken a long time to heal, but the therapist said that I am improving steadily because I am now walking on my own without the crutches and I have been doing this since last week," she said.

"When I broke my leg, it was very painful for about three or four days and after that the pain just stopped. My foot is not in any cast or anything like that now because two weeks after the injury, all the staples that were inside my leg they (doctors) took them out."

Pryce won the 3000m and the 2000m steeplechase at the ISSA/GraceKennedy Boys and Girls' Athletics Championships in April. She also won the 3000m and finished second in the 1500m at the Carifta Games a week later.

Pryce says that despite the injury, she is still receiving scholarship offers from schools in the United States but she is yet to make a decision on which she will be attending next year.

"The support from back home has been great because a lot of persons have reached out to me and who can help, have helped me, so I am thankful for this," she said.

"I am planning on going to college in the States because even now schools are still reaching out to me but I have not decided as yet which school I will be attending next year. However, once the doctors give me the go ahead to start running again, then I will definitely be back on the track next year."