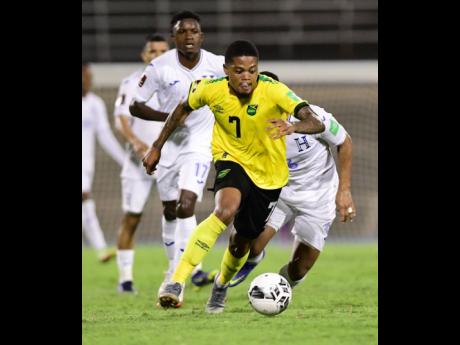 Reggae Boy Leon Bailey is counting his blessings as none of his loved ones was seriously hurt in a car crash.

Bailey's mother, his partner, his infant son, and friend Kevaughn Atkinson, also a footballer, were travelling in a car which crashed on the Edward Seaga Highway while heading to Ocho Rios on Tuesday afternoon.

The car reportedly collided with another vehicle before overturning on the side of the road. Bailey was not travelling with them as he was preparing for Jamaica's Concacaf Nations League game against Suriname at the time of the incident.

Bailey's adoptive father and manager Craig Butler told STAR Sports that the family is doing fine after the incident and the Aston Villa player is thankful for the support that he has received from the public.

"It was raining on the highway when the car got into difficulty and it flipped and overturned," Butler said. "They got minor bruises and the vehicle was written off. Based on what you have seen of the vehicle, only the grace of God protected that family.

"Little Leo (Bailey's son) got a little touched, but he is okay, and I am looking forward to them returning and enjoying their holiday."