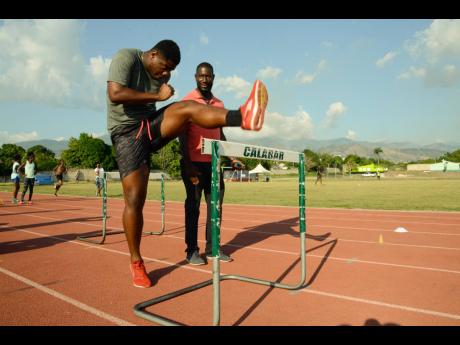 Having battled injuries and conditioning problems over the past three years, Former world Under-18 110m hurdles champion De'jour Russell says he is now getting back to his best, as he seeks a place on Jamaica's team to the World Athletics Championships in Eugene, Oregon, next month.

Russell, 22, clocked a season's best 13.46 seconds to win the men's 110 hurdles at the JAAA/SDF Jubilee Series at the Ashenheim Stadium in Kingston last Saturday. This was only Russell's second race of the season, after he returned a time of 14.58 in his season's opener in April. Orlando Bennett was second in 13.48, while third went to Tyler Mason in 13.56.

"With Trials coming up, there is no pressure because I try not to pressure myself, but I am looking forward to it," Russell said.

"Training has been going great this year, I can't complain, but we still have our ups and downs, but I am grateful to be competing in spite of all that I have been through over the past three years."

The former Calabar High School athlete is conditioned by coach Fitz Coleman at the University of the West Indies and is the training partner of reigning Olympic 110m hurdles champion Hansle Parchment.

Russell says that Coleman has been working closely with him over the past three years to return him to his best and for him to make this year's World Championships team.

"Working with coach Fitz Coleman has been awesome, because I must lift my hat off to him," Russell said. "He told me to trust the process and I am trusting the process."

Russell, who reached the final of the 110m hurdles at the 2018 Commonwealth Games, says he has been receiving encouragement and advice from Parchment during downtimes.

"He is a big motivator because he has been at the highest level and all I can do now is to learn from him and move forward," Russell said. "He is a great training partner and great competitor and I am just happy to be a part of this club with him.

"I was battling a lot of injuries including a hamstring injury and I had to do weight loss, but now I am at one of the best stages of my life compared with the weight.

"I went through a lot while I was out for three years but that is behind me now, focussing on what is ahead and I must thank my coach for helping me through the tough times."