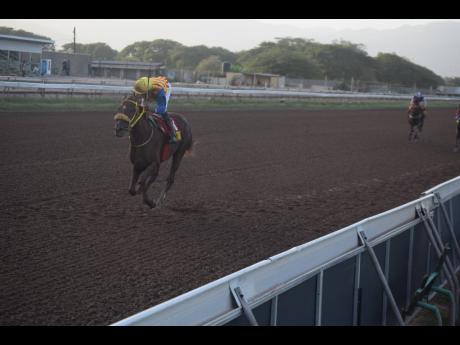 BLUE VINYL exploded from fifth to first, midway the stretch run of the 2000 Guineas, outclassing long-time leader BRINKS and EMPEROROFTHECATS in an 11-length victory for trainer Patrick Lynch yesterday.

Sent off as the 3-2 favourite from the dreaded one hole, BLUE VINYL kept pace from fifth along the rail while BRINKS led YELLOWSTONE, EMPEROROFTHECATS and MORIMOTO down the backstretch and into the lane.

ATOMICA and BLUE VINYL are likely to meet in next month's St Leger at 10 furlongs in which the filly will get a sex allowance of five pounds from the colt.

The colt versus filly debate, which raged from the stands to the car parks long after the Guineas closed the nine-race card, overshadowed Roman getting his first classic winner.

The jockey-trainer combination of Odeen Edwards and Phillip Lee produced two winners, 15-1 outsider DRACARYS in the fourth event and 6-5 favourite BRIDAL BLUSH in the seventh.

Azan's ARTESIA stalked and beat non-winners-of-four races at five and a half furlongs in the fifth whereas his LABAN held off fast-finishing ROJIRN DI PILOT by a nose to beat overnight-allowance company at five furlongs straight in the seventh.

Thomas opened the programme aboard BALTUSROL for leading trainer Jason DaCosta and extended his lead to three ahead of Dane Dawkins atop the jockeys' standings by making virtually all at nine furlongs and 25 yards with I REALISE in the eighth.