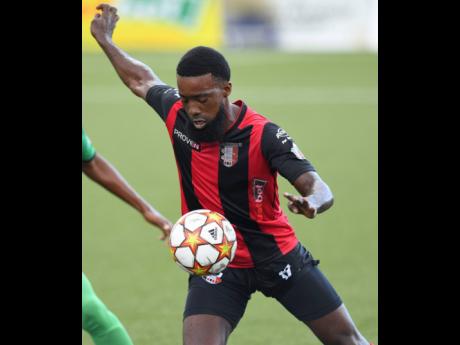 Kimani Arbouine's 93rd-minute long-range blast for Arnett Gardens took spectators by surprise, as he rescued a 3-3 draw with Molynes United in the Jamaica Premier League (JPL) at the Anthony Spaulding Sports Complex on Monday.

But for Arbouine, it has been routine in a season where he does his part in midfield to get Arnett competing for titles again.

Arbouine, the STAR of Week 19, scored his sixth goal of the season on Monday to put his club on 36 points, closing the gap on second place Dunbeholden who has 39 points and a game in hand.

Arbouine's curling drive from outside the penalty area gave Molynes United goalkeeper Peter Harrison no chance. He said that it was one of his best so far in his career, while not surprised at how he executed the shot.

"The way I [took] the shot, the way I have been preparing in the same position and the execution, everything was great," Arbouine said. "It didn't surprise me, but I have been practising those kicks in training, the coaches can tell you."

It has been a different Arnett Gardens team in their first year under head coach Paul Davis, who has them fighting for a top-two finish, an improvement on them missing the playoffs last season.

Arbouine said that while it took him a while to settle in the top flight, he credits his adaptability to how he has matured, stemming from his time as a schoolboy at Charlie Smith High School.

"I'm a very coachable player so I brought that into the JPL, although my start wasn't how I wanted it," he said. "But eventually everything is coming into place now and it is looking good right now."

It is that mindset that he hopes will lead Arnett back to greatness, not only domestically, but also regionally as they are hunting down a place in next season's Concacaf competitions. Arbouine says that their ruthless mentality has shown itself throughout the year and are far from complacent despite their recent form in their chase for the top two and the title.

"We still have a far way to go and we are not relying on this (recent performances). So we are thinking ahead," Arbouine said. "We are not going to count our ourselves out. We are lions. I have been saying that from the season started."