Teammates give me confidence to score – Wellington 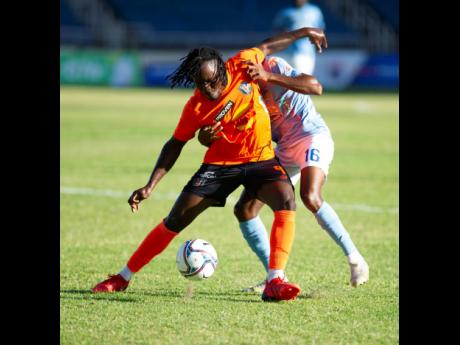 Tivoli Gardens midfielder Rodico Wellington says that the trust from his teammates has helped him improve his goalscoring this season.

Wellington, the STAR of Week 18, had a brace in their 3-1 win over Molynes United on Monday, a result that took the club into the playoff positions. Wellington is tied with Stephen Barnett as the team's leading goal scorers with five goals this season. While in previous seasons he found goals harder to come by, he says that he feels that he is providing a much need boost at a critical stage of the season.

"I have been working hard throughout the season," Wellington told THE WEEKEND STAR. "It may not have been the right time then, but I think that right now is the right time (for the results to show)."

Wellington's five goals have all come in his last five games, starting on April 17 in their 3-3 draw with Harbour View and continuing with strikes against Vere United, Dunbeholden, and now Molynes United. Wellington's first of his two goals on Monday came from a set piece in the 17th minute.

"I have been working on dead ball situations since the season started," he said. "And I always tell my teammates that if you cannot get a goal then just try to get a foul around the edge of the box because they know that I can execute them well.

"This could be one of my favourite seasons because I have been scoring one, two goals (in years past). Now I really think this can turn out to be a really great season for me."

His belief in his striking ability is matched only by his confidence in his team's playoff chances with four games left to play. Tivoli are in sixth place with 25 points. With their final games against teams in the top four, Wellington says that they are not intimidated knowing what is at stake.

"We have four top teams left and we know that they are going to be tough," he said. "But if we want to make the top six and if we want to win the league, we have to play tough games."