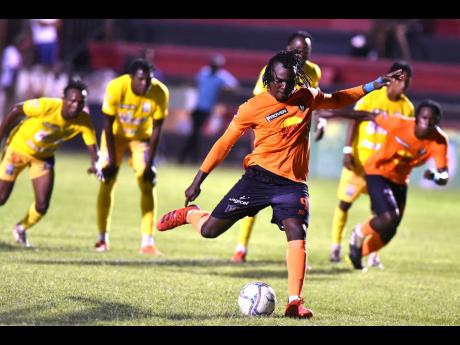 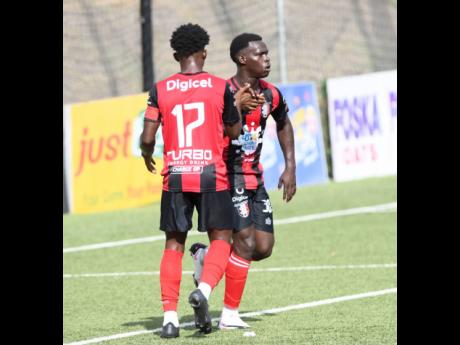 The departure of Philip Williams as head coach in mid-April could have been the platform for a slump for a club with play-off aspirations. However, Tivoli Gardens did not let the departure affect their form as they vaulted into the top six with a 3-1 win over Molynes United, stretching their unbeaten run to seven games. Tevin Garnett had the pick of the goals with a curling free kick and are now on 25 points, one above Harbour View (24). They will hope to continue their unbeaten run when they face Mount Pleasant on Sunday.

Arnett Garden's Romeo Guthrie ignited his team's hopes of a top-two finish with a brilliant first-half strike which proved to be the difference in their 1-0 win over Dunbeholden. With the team winless in their last two games, Guthrie's one-time blast gave Dunbeholden's Damion Hyatt no chance as they move to 35 points. They have now closed the gap on second-place Dunbeholden, who remain in second with 39.

A goal-line clearance would normally be one to celebrate. But that was not the case for Dunbeholden's Peter McGregor during their game against Arnett Gardens. Atapharoy Bygrave's header was initially saved by the Arnett Gardens goalkeeper but, instead of a tap in for a goal, McGregor incredibly sailed his effort over the bar. A strange turn of events in a game where they lost 1-0 and saw the gap between them and third-place Arnett cut to four points.

Arnett Gardens were reduced to nine men in their 1-0 win over Dunbeholden, one dismissal being Ajuma Johnson for a stamp on the leg of Dunbeholden's Demario Phillips. It put Arnett in a difficult position and the situation got even more complicated with Earl Simpson being sent off for a second yellow card. Johnson is fortunate that Dunbeholden did not capitalise on the man advantage and that Arnett escaped with a win.

Tivoli Gardens' Odean Pennycooke did his best to try to fend off Molynes United's Nicholas Nelson to preserve a clean sheet for his team. However, the attempt led to a deliberate handball in the box, blocking Nelson's attempt on goal, resulting in a straight red. It was a needless foul in stoppage time and, despite his team's 3-1 win, he will be suspended for their game against Mount Pleasant on Sunday.