Further And Beyond to hold off Runaway Algo 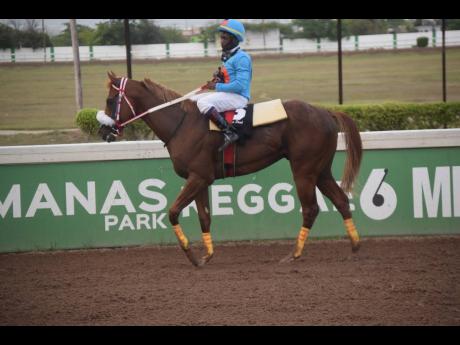 Runaway Algo, with Christopher Mamdeen aboard.

SIMILAR to a compass, the handicap needle for Sunday's Seeking My Dream automatically points north, FURTHER AND BEYOND, suggesting the reigning Horse of the Year should repeat his April 2 Saint Cecelia Trophy clobbering of EXCESSIVE FORCE and I'VE GOT MAGIC, who returned to turn the tables on him at a mile three weeks later with significant weight advantages.

It is, indeed, tempting to write off EXCESSIVE FORCE, who enjoyed a 21lb advantage, as well as I'VE GOT MAGIC, who ran 16lb lighter than FURTHER AND BEYOND on April 21, considering how Nunes' runner had dismissed them at friendlier weights in the Saint Cecelia.

However, factors such as FURTHER AND BEYOND's recovery after that gallant effort, in addition to a change of rider, plus the presence of speedy RUNAWAY ALGO, could turn the scale topsy-turvy, making a mockery of the handicaps.

RUNAWAY ALGO's connections are, no doubt, brimming with confidence after toppling MAHOGANY at five and a half furlongs, clocking 1:05.2. Emboldened by MAHOGANY and third-place I AM FRED's return victories, RUNAWAY ALGO's handlers have prepared the chestnut foreigner to stay the seven-and-a-half furlong trip, stretching him out for the first time at exercise in six and seven-furlong gallops.

How long RUNAWAY ALGO will be able to hang around on the lead is up for grabs. However, he can't be faulted on fitness from the evidence at exercise, returning with figure eight fitted.

An on-song FURTHER AND BEYOND should be able to stalk and pounce at the perfect trip but could be susceptible to holding speed, especially with wait-all-day Linton Steadman, conjuring memories of his loss to EROY on November 27, resulting in his losing the ride to Robert Halledeen, who clocked back-to-back wins with the chestnut colt before weight took a toll last time out.

FURTHER AND BEYOND tackling an improved RUNAWAY ALGO too soon could be another scenario to write off the handicaps, opening the door for I'VE GOT MAGIC and EXCESSIVE FORCE, who, at the weight, should really struggle to finish ahead of Nunes' runner.

RUNAWAY ALGO appears to be the fly in the ointment. FURTHER AND BEYOND's preparation, 1:15.4 for six furlongs, might not be the sharpest for him to stalk a speedster and pounce with 126lb.

The Seeking My Dream is one of those races in which one has to look beyond the scale.