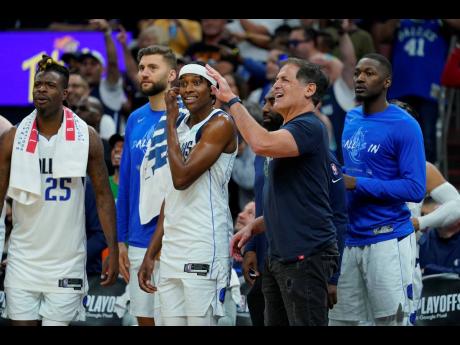 Dallas Mavericks owner Mark Cuban and players celebrate during the second half of Game 7 of an NBA basketball Western Conference playoff semi-final against the Phoenix Suns, in Phoenix, Arizona on Sunday.

The Dallas Mavericks were fined US$50,000 (just under J$8 million) by the NBA yesterday for a second violation of bench decorum during their Western Conference semi-final series against Phoenix Suns.

The second fine, twice as much as the first, was issued after Dallas' blowout Game 7 victory in Phoenix that sent the Mavericks to the West finals against Golden State.

The league said players and a member of the coaching staff stood for extended periods, were too far from the bench area, and encroached on the court during game action. Dallas beat Phoenix 123-90 on Sunday night.

The previous fine was issued after Game 2 in Phoenix, won by the Suns 129-109 for a 2-0 series lead. The Mavericks rallied by winning four of the last five games.

Dallas coach Jason Kidd criticised the league after the first fine, saying the league is focusing on the wrong things. He said players cheering their teammates should be celebrated rather than punished.

The second fine was issued not long before Kidd was to speak to reporters before the opener of the West finals.