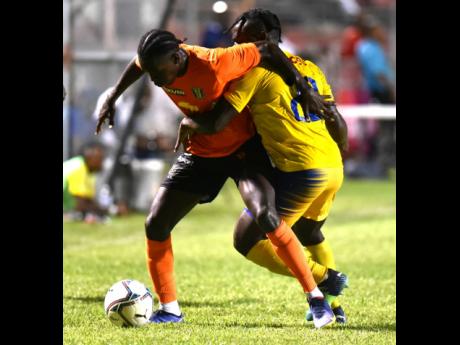 Tivoli were led to victory courtesy of a brace from Rodico Wellington in the 17th and 27th minutes of the game. Tevin Garnett scored Tivoli's third goal in the 78th minute.

Nicholas Nelson scored the consolation goal for Molynes in the 90th minute.

Both teams ended the match with 10 men after Molynes' Damion Thomas was sent off in the 76th minute after picking up a second yellow card.

Tivoli's Odean Pennycooke was sent off in the 90th minute, also after being shown the yellow card twice.

The victory has moved Tivoli from seventh to six place on 25 points from 18 games with matches remaining in the preliminary round of the competition.

Harbour View has now slipped to seventh on 24 points. The top six teams at the end of round will qualify for the playoffs of the competition.

"I think that we gave up a soft penalty in the 90th minute, but all in all, we got the three points and that important for us," Tivoli head coach Jermaine Johnson said.

Wellington opened the scoring for Tivoli with a 25-yard free kick which went like a rocket past goalkeeper Peter Harrison and into the back of the net.

Molynes conceded Wellington's second, from the penalty spot, 10 minutes later after Warner Brown was brought down inside the area.

Brown came close to doubling Tivoli's lead on the stroke of half time, but with Harrison at his mercy, his shot from 12 yards went wide of the target.

Garnett then wrapped up the victory for Tivoli 12 minutes from full time when he scored a well taken free kick at Harrison's near post. In the opening match of the double-header, Portmore United and Vere United played out a 0-0 draw.