Javon Francis upbeat ahead of Trials 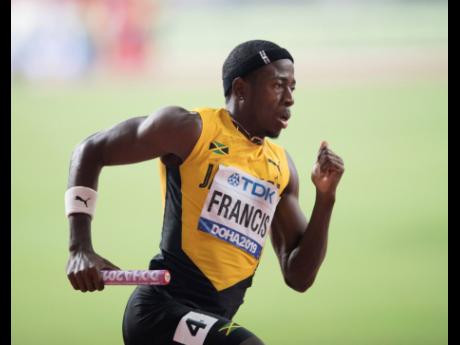 National quarter-miler Javon Francis says he is now slowly getting back to his best and is expecting a good season, having now fully recovered from a groin injury.

Francis, now 27, was injured during the men's 400m semi-finals at the National Senior Trials last summer and missed a spot on Jamaica's team to the Tokyo Olympics.

Having switched training camps at the start of the season, after spending three years in Texas with coach Darryl Woodson, Francis is now coached by Olympian Sanjay Ayre at Chase Athletics here.

He says that he is now fully fit, and he and his coach are taking what they consider to be a much smarter approach to the season in his build-up to the National Trials next month.

"The plans for this year is to stay injury-free, come to the Trials, and qualify to make the World Championships team," Francis said. "Training has been good. I have been working very hard and just being patient, and just taking everything one step at a time.

"This is my first year at Sanjay's club and it has been good. I like it. Everyone in the training group just come een like a family to me, like when I was back home training in Jamaica".

"Here, everyone wants me to do well, so every day I have to show up for training and put in the work."

Francis opened his outdoor season with a 46.09 seconds clocking in the 400m at the American Track League Orange County Classic in California on Saturday.

Francis, the 2018 Commonwealth Games 400m bronze medallist, is well known for his anchor-leg run at the 2013 World Athletics Championships in Moscow, Russia, which helped the country to secure the silver medal in the 4x400m.

The former Calabar High School athlete has a personal best time of 44.50, and says that he is aiming to better that mark this season.

"I feel like this is going to be a great year for me because this year, for times, I am trying to hit the 44 (seconds) barrier," he said. "I feel like I can hit that barrier; it is for me now to just listen to what the coach says. To just try and stay injury-free and just work hard and stay focused, so I am looking forward to a great season."

Ayre says Francis has been making good strides in his preparations this season and should be fully ready for the National Trials next month.

"He is looking very good in practice, because the main goal is to have him healthy going into the National Trials," Ayre said. "Training is going well for him and he is very consistent. We haven't raced a whole lot this year, but he is fully healthy now."