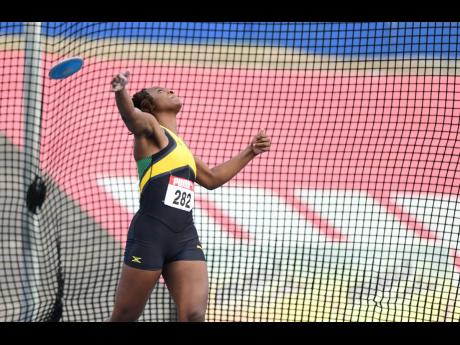 Jamaica’s Dionjah Shaw, winning the Girls U17 Discus Throw event with a record of 45.32m at the Carifta Games in Kingston yesterday. 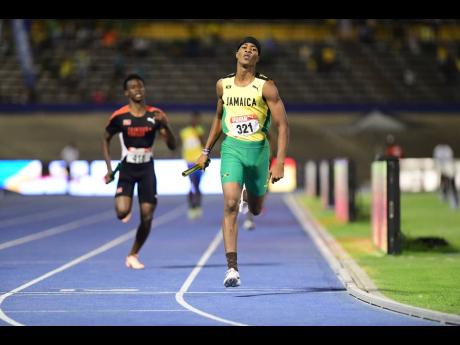 Marcinho Rose anchors Jamaica to gold in the Boys U17 4x400m relay final at the Carifta Games in Kingston on Monday night.
1
2

It was a carnival-like atmosphere at the National Stadium as Jamaica's junior track and field athletes made a clean sweep of the 4x400m relays on the last day of the Carfita Games yesterday.

The Jamaicans, led by Kobe Lawrence, had three of the four Carifta records that were broken yesterday.

Lawrence threw a record 20.02m to win the boys' U20 shot put to erase the previous mark of 19.97m. His teammate Christopher Young was second in the event with a mark of 19.12m while third went to Kevon Hinds from Barbados in 16.18m.

Dionjah Shaw accounted for the Jamaicans' second record on the day when she threw 45.32m to eclipse the previous girls' U17 discus throw record of 43.99m. Shaw's teammate Rehanna Biggs was second with 42.41m, with third going to Adriana Quamina of Trinidad and Tobago with 35.23m.

Shaw says she is now looking forward to the World Athletics U20 Championships in August.

"I'm targeting world juniors now in Colombia, to go out there and mash up the place," she said. "I think more records from me are possible."

Jaydon Hibbert won the boys' U20 triple jump with a distance of 17.05m. As that jump had a wind reading of 2.8 metres per second, it was another of his attempts which measured 16.46m that erased the previous Carifta record of 16.35m.

Jamaica captured three of the four gold medals on offer in the 200m events. In the girls' U20, Brianna Lyston won in 23.16 seconds, ahead of Shaniqua Bascombe of Trinidad and Tobago who got silver in 24.18. Kaylia Kelly of Jamaica got bronze in 24.33.

Jamaica's Bryan Levell captured the boys' U20 title in 21.18, ahead of his teammate Sandrey Davison who got silver in 21.35. Nazzio John of Grenada was third in 21.70.

The boys' title was won by Jamaica's Rickoy Hunter in 22.13. Keo Davis of St Vincent and the Grenadines was second in 22.19 while Jamaica's Marcinho Rose was third in 22.26.

Jamaica's Sabrina Dockery and Theianna Lee Terrelonge finished second and third in the girls' U17 final with times of 24.25 and 24.64, respectively. The British Virgin Islands' Adaejah Hodge won the event to take her third gold medal of the Games with a time of 23.42. Adding to her 100m and long jump titles, she also claimed the Austin Sealy Award for most outstanding performer.