Boyz all square with El Salvador 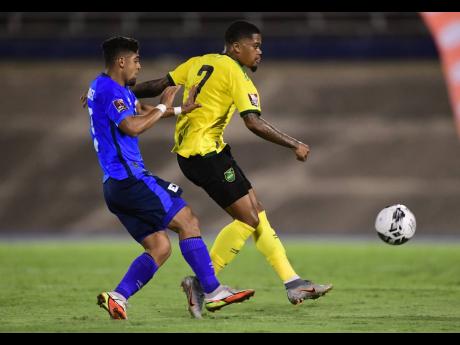 Jamaica’s Leon Bailey (right) makes a pass ahead of El Salvador’s Jairo Henríquez during their Concacaf World Cup qualifier at the National Stadium in Kingston on Thursday night.

A combination of poor finishing and a lack of concentration were key factors that resulted in the Reggae Boyz's 1-1 draw with El Salvador in their FIFA World Cup Qualifier match at the National Stadium on Thursday night.

Eriq Zavaleta opened the scoring for El Salvador in the 21st minute before Andre Gray netted the equaliser for the Reggae Boyz in the 72nd minute.

However, the Jamaicans only had themselves to blame for the draw as they squandered a number of the clear-cut chances throughout the match.

"We totally outplayed the El Salvador team and the only thing that was missing was the winning goal," Hall said.

"It is not poor finishing because the ball just didn't go into the back of the net. I think it was poor marking and a lack of concentration to allow them to score.

The Jamaicans controlled the game early on and should have taken the lead in the 12th minute, but winger Leon Bailey missed from 10 yards.

Bailey was sent through on goal from a pass from Javier Brown, but after rounding the goalkeeper, his effort was cleared off the line.

The Jamaicans were made to pay for that miss as El Salvador took the lead when Zavaleta arrived unmarked at the back post to head in a corner kick.

The Reggae Boyz dominated in all areas in the second half. Gray came close to giving the hosts the equaliser in the 49th minute, but his point-blank effort sailed over the crossbar.

Debutant Daniel Green came close to scoring for Jamaica five minutes later but his close-range header was tipped over the bar by Mario Gonzalez. Gray then returned to make up for his earlier miss when he arrived at the near post to tap home a cross from Ravel Morrison.

Jamaica are yet to win a qualifying game at home in this campaign, with three draws and three defeats. Jamaica will face hosts Canada on Sunday before closing their campaign at home against Honduras on Wednesday.