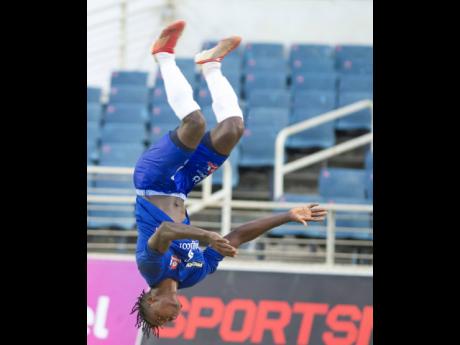 Dunbeholden’s Peter McGregor celebrates one of his goals against Portmore United with a backflip during their Jamaica Premier League match at Sabina Park in Kingston, yesterday. 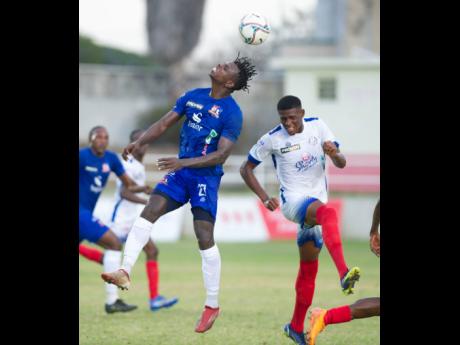 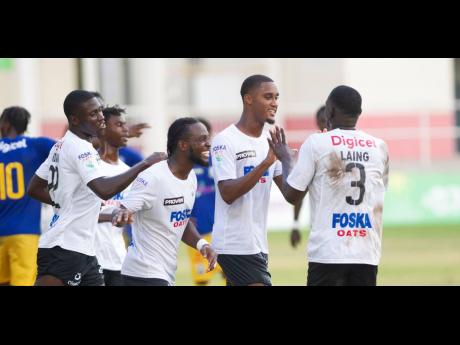 Cavalier’s Christopher Pearson (second right) celebrates his goal with Jeovanni Laing (right) and other teammates during their Jamaica Premier League game against Molynes United at Sabina Park in Kingston yesterday.
1
2
3

Peter McGregor marked his debut for Dunbeholden with a double to lead them to a 3-2 victory over Portmore United in the Jamaica Premier League (JPL) competition at Sabina Park in Kingston yesterday.

McGregor netted his goals in the 16th and 42nd minutes. Atapharoy Bygrave scored Dunbeholden's third goal in the 79th minute.

Emelio Rousseau in the 30th and Aeron Elliott in the 48th minute were the scorers for Portmore United.

The victory has moved Dunbeholden from fourth to second in the standings with 19 points, one behind first-place Waterhouse. Portmore remain seventh in the table on 11 points.

"It is a great feeling to score two goals on debut for Dunbeholden in the Premier League," McGregor said. "It is a great start for me, because as you see my teammate (Atapharoy Bygrave) is the leading goalscorer in the league and I am learning a lot from him in training as a youngster just entering the league."

In the opening match of the double header, Christopher Pearson also made a dream start to his JPL career with an 89th-minute goal to help Cavalier to a 2-0 win over Molynes United.

Kyle Ming scored the opening goal for Cavalier in the 45th minute.

Pearson, who helped Kingston College to its last Manning Cup and Olivier Shield titles, scored his debut goal for Cavalier from the penalty spot.

The victory was Cavalier's fifth from nine matches in the competition. The defending champions are now in fifth place on 15 points.

Cavalier Sporting Director Rudolph Speid said he was happy for the victory but wanted more goals.

Despite the defeat Molynes United coach Garnet Lawrence said he was pleased with his team's efforts.

"It was an excellent game from us because you saw the transition and you saw the kids coming and playing well." he said.