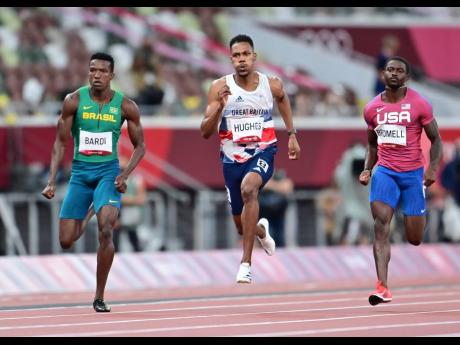 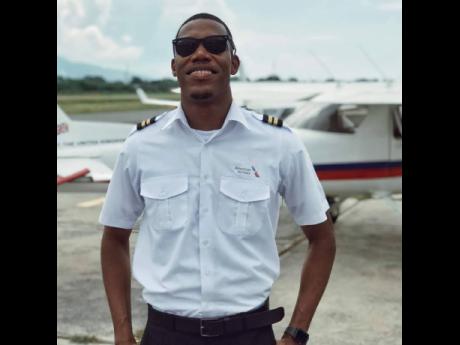 This image which first appeared on Facebook was thought by many to be sprinter Zharnel Hughes wearing an American Airlines uniform. Hughes, however, denies this, saying the photo was uploaded by an imposter.
1
2

Despite a recent post on Facebook, Anguilla-born Jamaica-based British sprinter Zharnel Hughes is not yet a commercial airline pilot.

Licensed as a private pilot, Hughes, 26, is wrapping his flying ambitions around his main focus, which is track and field.

Asked to comment on the post which seemed to depict him posing with a commercial jet in the background, Hughes explained "Not to be mistaken, I don't have my commercial licence. The photo you probably saw on the Internet is not me. I did not post that photo with the American Airlines badge I'm pretty sure you saw. It's not me that did it. It's somebody who's pretending to be me."

The European 100m champion has been enamoured with flying since he was a boy.

"It's been something I've been in love with since high school and once I got the opportunity to actually start flying, I took the jump and I started right away, it took me no time," Hughes, the Racers Track Club ace, told THE WEEKEND STAR. "It took a couple months, yes, and I got my solo in June of 2018 and from there on, I continued to build my hours."

Hughes includes time in his schedule to build up qualifying hours in the sky, so he can obtain his commercial licence someday.

"I get up early in the mornings on like Tuesdays and Thursdays and I try to head out to the airport at like 5:30, to get there for six [or seven] o'clock, so by the time nine o'clock comes, Ill be back in the gym, to get in my gym workout.

"I can't tell you exactly when I'll become a commercial pilot because the time frame doesn't really work out, being a professional athlete."

Asked why he chose flying as his future profession, he replied, "I always loved speed. I've always been in love with airplanes. I remember going to the airport nuff times with my friends and just plane-spotting."

Recently, on a trip to Anguilla, a plane spotting trip opened his mother's eyes on what drew her son to flying.

"She got to understand why I have such a burning desire for aircraft, just the deliveries of an aircraft, the speed of an aircraft, manoeuvring an aircraft within disruptive weather and stuff like that, it's a thriller for me and it's something that I enjoy," he said.

Hughes does additional work at home on his flight simulator, but flying is how he keeps his own counsel about preparing for life after athletics.

"I've always said it's important to have something to fall back upon," he said. "Even before I became a professional athlete, I always thought about what I'd like to be after track and field and while I can do it now, I'll do it and I think I've set up myself nicely."