Reid happy for reunion with Bernard 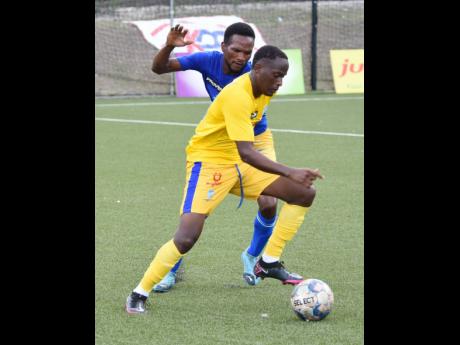 Midfielder Trayvone Reid, the STAR of Week 1 of the Jamaica Premier League, says that the opportunity to reunite with his former high-school coach Ludlow Bernard at Harbour View was too great to turn down.

Bernard's faith in the Kingston College old boy was rewarded in their season-opening game against Molynes United on Tuesday, scoring twice, including a stoppage-time equaliser, to salvage a 2-2 draw.

After a 2021 campaign with Tivoli Gardens that saw him score two goals, he has already equalled that tally in his first 90 minutes in Harbour View colours. Reid says that he believes working with Bernard again will help his game further evolve.

"I have been with Bernard since Manning Cup days, so I think that's a bond where I think it can help my game and make it much better," Reid told THE WEEKEND STAR.

Reid was a part of the 2019 Manning Cup team that lifted the Champions Cup that year.

During his previous three seasons (2017-2020) with Tivoli Gardens, he has scored five times in 46 appearances. While acknowledging his satisfaction with his positive start, he says that there is room for improvement for a team that has ambitions for a title run.

"For me, personally, I think it's good to start off the season on such a high with two goals," Reid said. "For the team, we could have done much better going forward. But it's the first match and it is a learning process. So going [forward], I think we can do much better, [but] it was good to see that the team didn't break down and kept fighting until the end."

The 92nd-minute equaliser left Dunbeholden goalkeeper Damion Hyatt rooted to the spot as Reid curled his effort into the top corner, a goal that Reid said he reacted to on "instinct".

Reid has so far not reached the double-digit mark for goals during his time in the league, a milestone that he says he is determined to reach this season, knowing how much Bernard will be depending on him to play his part in the attack.