KT motivated for Walker Cup final by past glory 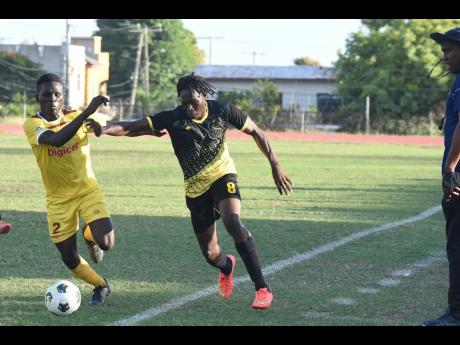 On the verge of an unprecedented ISSA/Digicel Walker Cup crown, Kingston Technical High School (KT) head coach Shaun Charlton says that the experience of champions past has been the biggest asset in preparing for this opportunity.

KT will face defending champions St Catherine High in the final at Stadium East at 1 p.m. on Saturday, looking to bring an end to a schoolboy title drought that has lasted for four decades.

KT's surprise appearance in the final came at the expense of Mona High School, who defeated them in the semi-finals, but were ruled out of the competition having fielded ineligible players in that game.

Charlton said that it has been the counsel of coach Keith Bryce, who won in 1981, and Gladstone 'Bunny' Byfield, a member of the 1962 winning team, that have benefited him the most on this journey.

"They have been a tower of strength and inspiration," Charlton said. "Mr Byfield, who is my football father, is the one that is teaching me the concepts and helping to develop the culture of Kingston Technical with this new generation of players."

Charlton said he hopes his charges make the most of their new lease on life in a season where second chances have been few and far between since KT qualified for the Manning Cup quarter-finals. They lost all three of their quarter-final group games, conceding 10 goals in the process, and scoring two.

Despite that form, Charlton says that Saturday's final represents an opportunity to prove why they deserve to play for silverware this year.

"My message is that you got this chance," he said. "You have to make it count and you have to show the reason why you deserve this second chance.

"In life, it's not every time that you get a second chance, and God has blessed them with a second chance. We are on a spiritual journey and I believe strongly in the power of God."

"It would be good to be back-to-back champions," he said. "In 2019, we reached our first final and won, it and now we are here defending it again. It's a good feeling and we want to see if we can defend it."