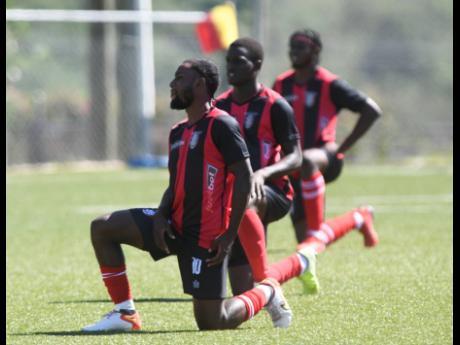 Arnett Gardens players kneel in protest of crime and violence in Jamaica at the start of their Jamaica Premier League game against Cavalier at the UWI-JFF Captain Horace Burrell Centre of Excellence in St Andrew on Sunday. 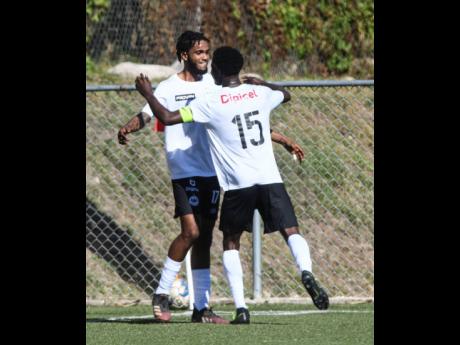 Defending champions Cavalier can thank striker Shaniel Thomas for starting their 2022 campaign with a win. Having led Arnett Gardens in their opening game from the 60th minute onward, Chavany Willis' 96th-minute equaliser seemed to have guaranteed a disappointing start to their title defence. But Thomas rescued Cavalier a minute later, showing championship pedigree as they target back-to-back titles.

Mount Pleasant showed their offensive might in their 5-1 thrashing of Humble Lion, with four of their goals occurring in the first half. Those half-time strikes came courtesy of a brace from Daniel Green and tallies from Allan Ottey and Ricardo Morris. While it is very early in the campaign, Mount Pleasant sit atop the standings with three points and a superior goal difference (+4).

Dunbeholden needed late heroics of their own to get their 2022 campaign off and running, thanks to a 92nd-minute game-winner from Jamiel Hardware in their 2-1 win over Vere United. Dunbeholden failed to make the play-offs last season, losing in their regular-season finale. They hope that Monday's win will be the start of a season that brings a change in fortune for the St Catherine-based club.

In response to the recent surge of murders on the island since the start of the year, JPL players lent their voice in the ongoing battle against crime. Before kick-off in their season openers, all players took the knee in a show of solidarity with the victims and a call for peace.

Similar to last season, Humble Lion started their 2022 campaign with a defeat, suffering this time at the hands of Mount Pleasant 5-1. Humble Lion could not recover from their difficult start last season, and finished at the bottom of the 11 team table. Their opening-day thrashing has already put pressure on head coach Andrew Price to produce better results this year.

Arnett Gardens were seconds away from salvaging a point against defending champions Cavalier in Paul 'Tegat' Davis' return to the West Kingston club as head coach. However, they could not hold on to the point they laboured half an hour to gain, conceding a last-second goal to Cavalier's Shaniel Thomas to doom Arnett to an opening-day defeat. However, Arnett showed their fighting spirit in scoring late, which is something that Davis will look to build on.

Despite playing with 10 men, Montego Bay United's return to the top flight started well when Giovanni Reid got the opener in the 67th minute. But the man-advantage eventually proved to be their Achilles heel as they could not close the door on Waterhouse, losing 2-1.

It was not a good opening week for the clubs in Clarendon as Vere United conceded a late goal in their 2-1 loss to Dunbeholden in their season opener. Under head coach Donovan Duckie, they managed to surpass their expectations in the 2021 season, making the play-offs for the first time. However, the defeat showed that they will have to be vigilant if they want to repeat last season's success.