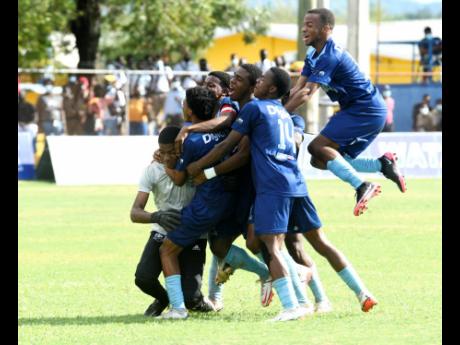 Manning's School head coach Everton Tomlinson says they are motivated by his vision of lifting the ISSA daCosta Cup when they take on Garvey Maceo High School in the final at STETHS Sports Complex in Santa Cruz on Friday.

If Manning's should win, it would be the first trophy in their 283-year history.

"What is happening now for me is not frightening," Tomlinson said. "I was frightened in 1992 when I got a vision that I would coach Manning's to a daCosta Cup title. In the vision, I saw a set of twins. I had two stints with Manning's and there were no twins. When I was asked to coach Manning's this year, I realised there was a set of twins. It is not frightening for me, the progress we have made because there is a Cameron and Brandon Dennis, the twins in the squad.

"I don't want to question God. I really look at it and want to understand that what I visualised then, is it going to materialise? I am given the task, it's manifesting itself and I am a man that has strong belief in God. So going into this final, if it's God's will, I don't think any force can stop us."

Tomlinson is not the only coach harbouring dreams, as Garvey Maceo's Merron Gordon envisions winning all the age-group trophies available with the same players.

Garvey Maceo came into the season as genuine title contenders after their squad comprised players who won to under-14 and 16 all-island titles in 2019. They will be looking to their experienced talismans in Gregory Cousins and Cleo Clarke, who have Premier League experience with Vere United and Cavalier, respectively. They have scored all three goals in the semifinals.

"We are approaching the game positively," Gordon said. "Manning's is a tactical team, so we have to be aware of that. We have to go out, execute, and play as hard as we can. We are just 90 minutes away from lifting the cup.

"It's always important to have experience and when you have winners all around, it can lift the expectation of the entire team. It's always good to win with a group of boys from under-14 right through to daCosta Cup, so we will be going for it."

Edwin Allen will be going into the game high on confidence from the 4-0 win over Manchester High School in the semi-finals, and would want to ride that momentum to their first-ever schoolboy football title. STETHS, however, can draw inspiration from being six-time champions.