Bernard: KC are not the favourites 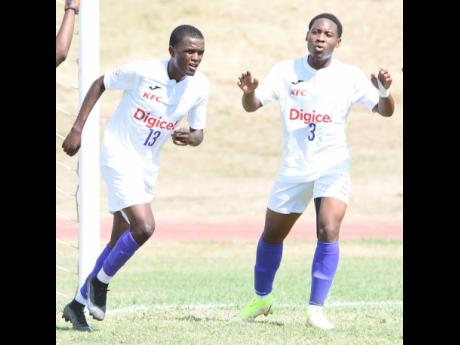 Kingston College (KC) head coach, Ludlow Bernard, has dismissed reports which have claimed that his team are firm favourites to win this year's ISSA/Manning Cup title. Bernard made his comments after KC's comfortable 7-0 victory over Clan Carthy yesterday.

KC were led to victory courtesy of a hat-trick from striker Rojay Nelson in the 26th, 45th and 56th minutes. He received solid support from Christopher Pearson, who scored a double in the 63rd and 82nd minutes.

Substitutes Taraj Andrews (60th) and Jaheem Johnson (70th) were other scorers for KC. The victory was the second for KC who have been very dominant so far this season.

Bernard said KC will not be sidetracked by those who are pinning the favourites' tag on the North Street-based school, they are just focusing on taking things one step at a time.

"That is public opinion, that doesn't faze me one bit and it is not the first time that persons would be saying that," said Bernard. "Clearly we have a job to do and KC are on a mission like every other school and we are just playing our part in this big race," he said.

"Every game is crucial because I am not taking anybody for granted," Bernard said.

"I think that there are teams in the group that can surprise you on any given day and my mission is to keep the boys here very concentrated and ensure that each game they deal with it on its merit and that we try and grind out the best possible result," he said.

KC, who last won the Manning Cup title in 2018, dominated the entire match as they outclassed the Clan Carthy team in every department.

The Purples netted two goals in the first half before returning to slam home five in the second period as they ran out comfortable winners.

Bernard said his team took some time to find their rhythm because they should have scored a lot more goals in the first period.

"I think it was a workmanlike performance from us," he said. "They probably took a little more time to get into their own, but once that happened then we got some goals.