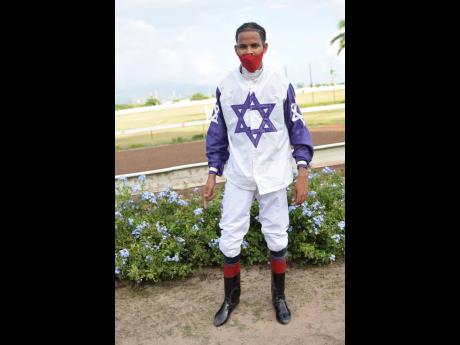 Raddesh Roman in the winners’ enclosure after riding EL GRINGO to victory at Caymanas Park on Sunday, November 7.

After winning his first two races of the season last weekend, top non-claiming apprentice rider Raddesh Roman is now hoping to finish the year with a bang at Caymanas Park.

Roman, 23, rode FAULYNA FOREVER to victory on Saturday for trainer Richard Phillips before closing out his two-timer on Sunday with a win aboard EL GRINGO for trainer Donovan Russell.

These victories were the first of the season for Roman who recently returned to the saddle after almost 10 months out due to a shoulder injury.

In fact, the lightweight jockey has been out of action since December 19 last year, after falling from UNION FOUR at exercise.

Roman had surgery twice on the same shoulder during the past six months before making a full recovery in August.

The young rider said it is a delightful feeling to back in the winners' enclosure and he is now looking forward to a lot more success for the reminder of the year.

"It was a wonderful feeling to be back in the winners' enclosure on two winners on Saturday then Sunday because this is what I have been working for since my return to the saddle from injury," said Roman.

"It helps to boost my confidence a lot and let my confidence get a lot higher because the more races that you win is the better you will become so I just want to keep winning races at all times," he said.

"I just want to continue in this way because I was out for a very long time and it was a bit tough watching everybody else riding and winning and I was unable to do so because of the injury," said the soft-spoken jockey.

Roman, who began riding at Caymanas in 2018, has now ridden 63 winners so far.

He pointed out that he is almost 100 per cent fit now because he has been exercising a lot of horses in the mornings and he is not feeling any pain in his shoulder.

"You can expect great things from me because I am getting back to my best and all I want is to continue winning races and thus make myself and my family proud," Roman said.

"Physically, I am almost 100 per cent fit because I am not feeling any pain in the shoulder and my body is getting a lot fitter and so I just want to keep it this way," he said. "I just want to win as many races as I can, finish the year with a bang and push on next year."