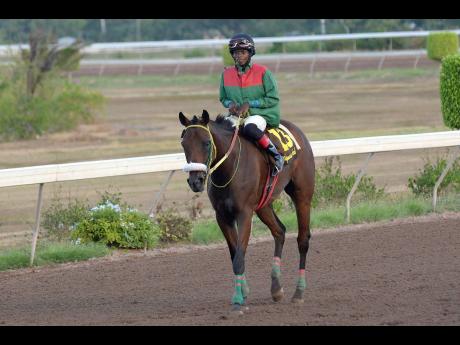 Top claiming jockey Samantha Fletcher has been ruled out of action for more than a month after suffering a broken right thumb during a three-horse spill at Caymanas Park on October 9.

"I saw a bone specialist last Friday and they have put my hand in a cast, because they said that my right finger is fractured," Fletcher revealed in a STAR Sports interview.

"They said that I will be out of the game for more than a month and this is a little disappointing because right now I was on a good run, and this is going to set me back really bad," she added.

Fletcher fell from her mount, UNCLE VINNIE, in the feature 10th race for the Vassell 'Jolly Man' Najair Memorial Cup, which was contested over five and half furlongs. She was then rushed to the Spanish Town Hospital, where she received treatment to the injured finger.

The other jockeys who were involved in the spill, Oshane Nugent and Richard Henry, did not sustain any injuries and were cleared by the medical team to continue riding.

The 29-year-old Fletcher has been in excellent form this year. She became the first female jockey in the history of Caymanas Park to boot home three winners in one race-day.

She has so far ridden 25 winners in her career, with 14 of those coming this season.

"I can just hope for the best whenever I come back, because I will be more than ready when I return to Caymanas Park," Fletcher said.

A former student of Innswood High School in St Catherine, the soft-spoken Fletcher pointed out that she had fallen off horses on numerous occasions before, and therefore she is not going to let this latest spill affect her self-belief.

"This is not going to affect my confidence, because I have fallen off horses a lot of times in the past, and I always come back a lot stronger; and this time it will be no different," she said.

"This is my life and my career, and this is what I enjoy doing, and nothing is going to stop me from carrying on once I am healthy and strong," she said.