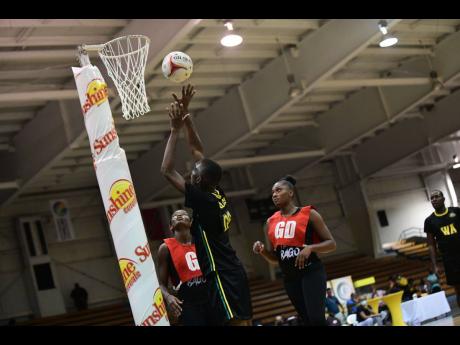 Trinidad and Tobago’s Anilcia Baptiste (left) and Shaquanda Greene-Noel look on as Jamaica’s Raheem Wallace takes a shot during the Trinidad and Tobago Calypso Girls vs Jamaica men exhibition netball match at the National Indoor Sports Centre on Thursday, October 14. The Sunshine Girls will take on the Jamaica men’s team in an exhibition match today at 6 p.m. 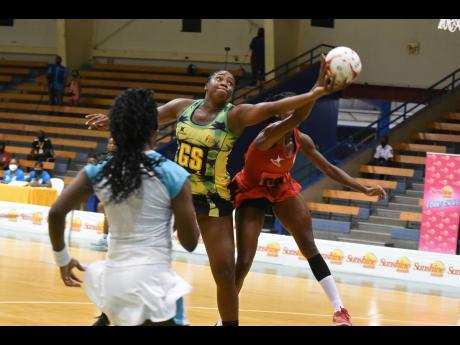 A massive showdown is expected when Jamaica's Sunshine Girls senior netball team takes on the national male team in a one-off game at the National Indoor Sports Complex tomorrow. Match time is 6 p.m.

The Sunshine Girls will head into the contest oozing with confidence after they completed a 3-0 series victory over Caribbean rivals Trinidad and Tobago last night in their three-Test series.

The Sunshine Girls have always received fierce competition from their male counterparts whenever they are preparing for international matches. They will be using the game as part of their preparation for next year's Commonwealth Games in England.

However, tomorrow's encounter will be a lot different due to the fact that this game will be streamed live around the world for everyone to see the men competing against the Sunshine Girls.

Captain Jhaniele Fowler said they are expecting a very tough match because their opponents understand the game well and they are also highly skilled.

"The male team has always been really good for us," said Fowler.

"I think that whenever we've trained against them it has always been really challenging because they are very skilful and talented, so we have to put out our 'A' game," she said.

"I know that they will be coming very hard at us because it is going to be live-streamed and others will be watching and so I am expecting a very exciting match," Fowler said.

She added: "I am glad that they can come out and show their talent so that everyone in Jamaica can see them and so it is going to be a real challenge for us playing against them."

Meanwhile, captain of the men's team, Kurt Dale, said they are very delighted to compete against the Sunshine Girls and are looking to put on an entertaining showing for everyone.

"We are very grateful for this opportunity because the males are very excited," said Dale.

"Talent-wise we are very skilled because we have played against the Sunshine Girls a lot over the years and we have given that tough competition that they needed," he continued.

"We can match them with height, elevation and speed, so we will be coming very hard. We are hoping to put on a good showing for the wider Jamaica and the world to see that the males are here to play and we are just as talented as the females," Dale said.

The male team defeated the Calypso Girls 66-22 in a practice game last Thursday.