No sweat for Sunshine Girls 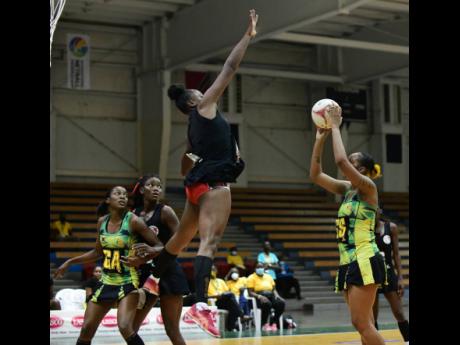 The eastern Caribbean-based netballers were whipped 64-32 in the second match of the three-Test Sunshine Series and the Sunshine Girls will be seeking to complete a 3-0 sweep of the series in today's third and final match at the same venue. Game time is 6 p.m.

Jamaica won the opening game of the series 71-22 last Saturday. Coach Connie Francis was pleased with the team's performance yesterday and the Girls are now looking to complete the job in style today.

"I thought they did well enough after we made changes to give other persons an opportunity to play," Francis said.

"I also thought the game went to plan. It's a 10th-ranked team and when we play a 10th-ranked, the expectation is that winning is what we are going for and nothing less," she said. Francis made four changes to her starting line-up for the game with captain and goal shooter Jhaniele Fowler being replaced by Gezelle Allison and Shanice Beckford came in for Rebekah Robinson at goal attack. Nicole Dixon came in for Adean Thomas at centre, while Shannika Johnson got the nod over Shadian Hemmings at wing defence.

However, despite the new faces the Jamaicans still managed to carve out a 15-8 lead at the end of the first quarter.

They then increased their advantage in the second stanza to take a comfortable 24-14 lead at half-time.

Goalkeeper Shamera Sterling and goal defence Latania Wilson played brilliantly for the home team as they made a number of interceptions while shutting down Trinidad's shooters.

Fowler, rated the best shooter in the world, was brought into the game at the start of the third quarter and quickly showed her class by scoring 18 of the Sunshine Girls' next 20 goals as Jamaica took a 44-22 lead at the end of the third stanza.

Fowler top scored for Jamaica with 36 goals from 38 attempts. Allison 13 from 20, Beckford 12 from 14 and Amanda Pinkney three from five were the other scorers for the Sunshine Girls. Afeisha Noel 17 from 20 and Kalifa McCollin 15 from 16 led the way for the visitors.

Althea McCollin, head coach of Trinidad and Tobago, said her team is improving.

"It was far better than the first game we played because we came and we executed," said McCollin. "I think we still have to be more consistent in feeding the ball into our shooters. We are getting a lot better as the series goes on and so I am expecting a much better performance in the final game," she added.