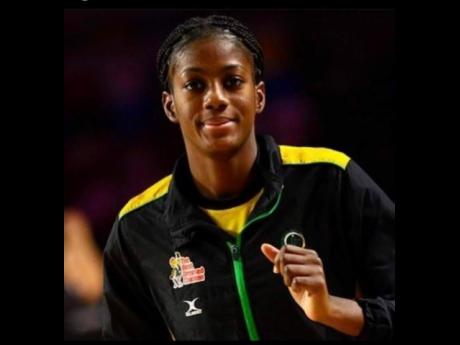 National senior netball player Latanya Wilson is beaming with pride after signing a two-year contract extension with the Adelaide Thunderbirds in the Australian Suncorp Super Netball League earlier this week.

The 20-year-old Wilson, who plays wing defence, had a relatively quiet year for the Thunderbirds in her debut season, where she was mostly used as a substitute player last season.

Wilson is delighted that she was given another opportunity by the club to prove herself in the league and is looking to make her mark in the competition next season.

"I am elated because it is every netballer's dream to go to Australia and play and therefore, I am excited that my dream is finally coming through and I got another opportunity to showcase my talent Down Under," said Wilson.

"Last season was great, but it is work in progress for me, because I still think that there is more that I can showcase and there is always room for growth, and so I am excited to see what next year and 2023 will bring," she said.

Wilson, a former Gaynstead High School netball star, played in 13 matches for the Thunderbirds, nine of them being substitute appearances.

Despite her limited court time last season, Wilson pointed out that she has gained a lot from the experience.

"It wasn't until the end of the season that I actually started starting in the matches, but I have benefited a lot from the experience in many ways, and one is that I have seen a lot of different styles of plays," she said.

"I also experienced different types of umpiring, and I was also coached by different coaches down there; and so it was truly a great experience, and I am looking forward to great things next season," she added.

The Thunderbirds is also the club of Wilson's national teammate, Shamera Sterling, who was among the top defenders in the league. The soft-spoken Wilson noted that one of her main aims next season is to cement her place in the starting line-up.

She is expected to suit up for the Sunshine Girls home Tri-nation series against South Africa and Trinidad and Tobago next month.