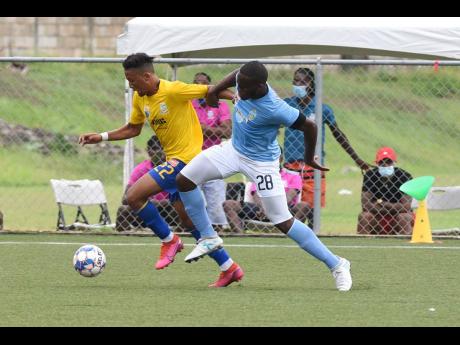 Harbour View’s Oquassa Chong (left) getting away from Shawn Dewar of Waterhouse during a Jamaica Premier League match on Monday, June 28.

Chong, the outstanding player in the JPL this season, is also the competition's leading goalscorer with three. The 20-year-old Chong was in excellent form last Saturday as he scored and then provided an excellent assist to help Harbour View to a 2-0 victory over Mount Pleasant Academy at the Stadium East field.

Chong, who tormented his opponents with his movement off the ball and his deft dribbling skills, went down injured in the 69th minute and was later substituted after he was hit in the face by Mount Pleasant's Sue-Lae McCalla. The Mount Pleasant player was cautioned for the offence.

Bernard said he is hoping that the opposing players are not trying to hurt Chong deliberately because this could very well end the youngster's career.

"I think that he is being tactically targeted because it is very clear that some of the defensive plays surround trying to contain young Chong," said Bernard.

"It is the nature of the game that he is going to receive some harsh challenges that he has to cope with," he said, but pointed out that Chong is a very tough player and he will definitely be ready to go in the upcoming matches.

"I think that this experience in the games will put him in a better position to elude some of the challenges that he will face and some of the tactics that he may be up against," Bernard said. "He is in good condition and in good spirits. It is just another knock like in any other game that he will overcome. He will be available and ready for all games once he is physically okay," the Harbour View head coach said.