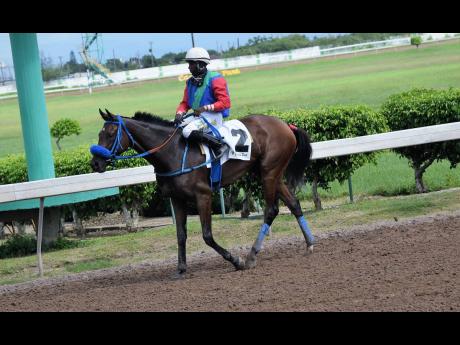 IAN Parsard's filly, SHE'S A WONDER, is the only maiden in Saturday's six-furlong Cash Pot 'Only One For Me' Trophy race, the first major two-year-old event of the season. However, despite being literally surrounded by winners, breaking from stall three in the six-horse field, the quick bay filly is a cinch at the weight should Dane Dawkins make 110lb.

With two second-place finishes under her girth, SHE'S A WONDER reports the lightest she has ever been after impressing last time out against United States-bred POLLY'S GAL, who had to work overtime to win in a fast 59.2 at five furlongs round on October 10.

Though POLLY'S GAL eventually won by a length and a quarter, SHE'S A WONDER led in splits of 22.4, 34.0 and 45.3, game to the end with 114lb after being caught inside the last furlong. POLLY'S GAL was only five pounds heavier than SHE'S A WONDER but represents a good marker horse by which to judge the local bred for the Cash Pot Trophy.

Making her debut on September 27, POLLY'S GAL all but dwelt at the start in a race won by stablemate DEN STREET before recovering to place fourth after the event was long won. Returning with tongue tie fitted and administered lasix, POLLY'S GAL pressed and overpowered SHE'S A WONDER on October 10 in a performance that suggested it would have been a different outcome had she been alert at the start when beaten by DEN STREET on debut.

DEN STREET, a winner of two races, is among three Wayne DaCosta runners in the Cash Pot, tackling SHE'S A WONDER and Anthony Nunes' pair, SANTORINI and HOIST THE MAST, drawn alongside each other at post-positions one and two, respectively.

DEN STREET has a burdensome topweight 123lb, penalised for his two victories, which could end his win streak. Though he improved his five and a half furlong time by two-fifths of a second, 1:06.3, after posting 1:07.0 for an easy victory on debut, DEN STREET wasn't as flashy when beating stablemate SENSATIONAL ENDING in 1:06.3, coming from behind in an event in which he was one of six DaCosta runners in a seven-horse field.

Nunes's SANTORINI, a half-brother to middle-distance open-allowance runner, HOUDINI'S MAGIC, showed grit when coming from behind to win on his October 17 debut at five and a half furlongs. However, the speedster could leave him flat-footed down along the rail, carrying 119lb and with too much to do in the stretch run against lighter and quicker runners.

Though he may be aboard one of the quickest in the line-up, Dawkins will have to watch out for rabbits from the camps of Nunes and DaCosta. Parsard has fitted SHE'S A WONDER with blinkers, possibly on the advice of Dawkins, suggesting he has noticed her gazing in her races. She galloped an easy 1:18.0 in blinkers, followed up by striding seven furlongs in 1:36.1, which must have pleased Parsard for him to declare her in the headgear.