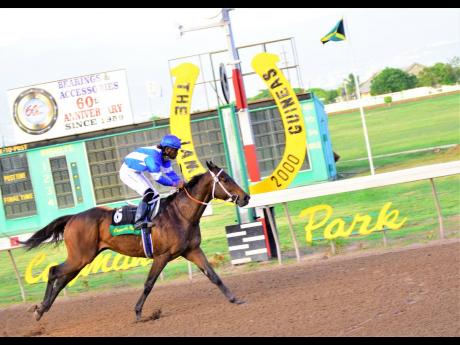 LAST month's St Leger left more questions than answers for the Jamaica Derby following NIPSTER's upset victory over stablemate WOW WOW and MAHOGANY's debacle at the gate, resulting in his fourth-place finish. ONE OF A KIND's third-place run was probably the only performance that came as no surprise.

NIPSTER finishing ahead of WOW WOW for the first time in five starts, the first time at two turns, would suggest that the lesser-heralded of the stablemates is the better stayer. However, many variables were at play on St Leger Day, including a sudden downpour and a rabbit gone wrong, the filly ANOTHER AFFAIR, ripping 1:11.3, one of the fastest six-furlong splits ever at the distance.

Having not a clue of the whereabouts of MAHOGANY, until Omar Walker appeared in his rear-view mirror at the half-mile, Robert Halledeen pressed gas and WOW WOW went after stablemate ANOTHER AFFAIR, sprinting clear in a mile split of 1:38.2, which took toll a half-furlong out when NIPSTER ran through along the rail.

Simply put, the race fell into NIPSTER's lap after pre-race plans, by all and sundry, went out the window the moment gate opened on St Leger Day.

The horse that probably ran the best race, MAHOGANY, finished fourth, beaten seven and a quarter lengths after having to make up a tremendous amount of ground down the backstretch, which knocked the wind out of him after straightening two lengths behind WOW WOW at the top of the lane.

However, with 12 furlongs hanging over his head like the sword of Damocles, following his loss to WOW WOW at a mile in the 2000 Guineas, MAHOGANY's stamina at Derby distance must be in question with ANOTHER AFFAIR still around and her intentions already made clear from St Leger Day.

Aided and abetted by ANOTHER AFFAIR, WOW WOW will now have a target to run at, MAHOGANY. Losing by a length at 10 furlongs, after chasing ridiculous splits, which were not intended for him, while NIPSTER sauntered 15 lengths behind at the half-mile marker and 10 lengths off at the top of the lane, by no means suggest WOW WOW will not get the Derby distance.

Another tactical race is set to be played out in which the principals remain the same. WOW WOW's connections, though the same as NIPSTER, have shown their confidence by retaining Halledeen, who would have learnt a lot from the St Leger and should use his mount's class to land the derby.