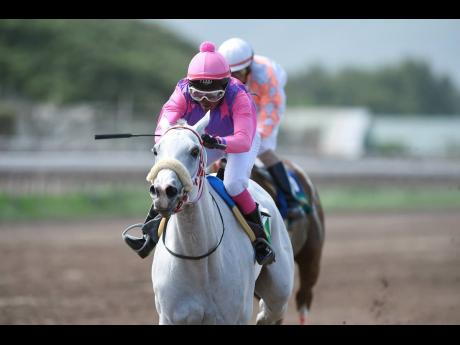 File Melissa Ward aboard MARVELLOUS MARVA (second left) wins the sixth race to claim the mark my word trophy over a distance of 1820 metres at Caymanas Park Labour Day Wednesday May 23, 2018

Having struggled to contain her body weight in the last couple of the years, jockey Melissa Ward said she is now feeling a sense of relief after winning her first race of the year at Caymanas Park on Saturday.

Ward booted home the Alford Brown-trained 12-1 shot ARMAGEDON in the ninth race over the five straight course to victory.

It was Ward's first victory in more than two years, with her last win coming aboard MARVELLOUS MARVA in May 2018.

Ward, who has now recorded 18 career wins, said she is much fitter and comfortable now in the saddle because she has managed to bring down her body weight from 140 pounds to 117 pounds.

"I have gained a lot of pounds because I weighed 140 pounds and I said to myself if I wanted to come back and start riding again," said Ward.

"I am at 117 pounds now, but I am still not satisfied and so I am working much hard to get it down to about 110 pounds and this will help me to get more rides and more winners in the future," she said.

However, the 26-year-old Ward, who was riding in her third race of the season, said she was very delighted to be back in the winner's enclosure.

"This is my third ride since I am back and my first winner of the year and so I am very happy for this win," said Ward.

"It was an awesome victory because I have been programming this horse with the trainer and he told me that he was looking for a race for her and this was the right race," she said.

"Based on her preparations I know I was confident in her that she was going to win this race," Ward said.