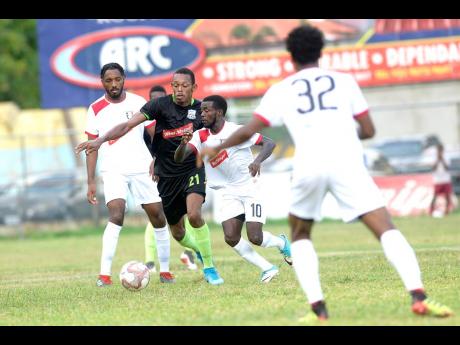 General Secretary of the Jamaica Football Federation (JFF), Dalton Wint, is warning local players that their conduct while playing in the Red Stripe Premier League (RSPL) competition may have serious implications on whether they are called up for national duties.

This, after Arnett Gardens' midfielder Kimani Arbouine was slapped with a six-match suspension and a $10,000 fine by the JFF disciplinary committee last week for engaging in a physical alltercation with a fan last month

Wint told Star Sports that indisciplined players will not be accepted in the Reggae Boyz squad and therefore, they must think before they act.

"It won't help them in them been able to find themselves in the national programme," said Wint. "Having disciplinary issues will not allow you much match time

because you will be suspended."

"They have to curve their bad behaviour if that is what is happening because it won't help and if you come into the national programme, and you have that sort of bad behaviour, then the coach will not select you," Wint said.

He is also imploring the players to always to be on their best behaviour at all times whenever they are competing in the league.

"My advice to the players is to always maintain your composure because it is football and it is an aggressive sport but you have to learn to curtail your bad behaviour," he said.

The 22-year-old's suspension comes as a consequence breaching Article 41.6 of the Premier League Clubs Association rules and regulations for actions during his team's 2-1 defeat to Molynes United in their Red Stripe Premier League fixture on September 22.

Arbouine was substituted in the closing stages of the game when he jumped the parameter fence at the Drewsland Stadium and got into a physical confrontation with an Arnett Gardens supporter.

He was seen on video throwing punches at supporters, which started a brawl. He was shown a red card by the referee and had to leave the team's dugout.