Wolmer’s look to close gap on JC in Group E 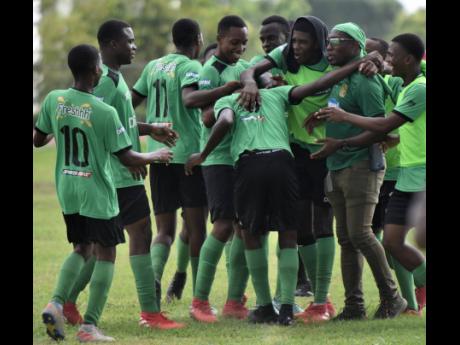 Members of Calabar High team celebrate after scoring a goal against Norman Manley High during their ISSA/Digicel Manning Cup match at Calabar on Wednesday. Calabar were leading 2-1 when the match was abandoned due to rain and lightning.

Wolmer’s Boys will be looking to close the gap on leaders Jamaica College (JC) when they play away to Jose Marti High in Group E of the ISSA/Digicel Manning Cup competition today.

The Alex Thomas-coached Wolmer’s, who are heavy favourites to win today’s encounter against their opponents, are second in the group on 20 points from eight games, five behind JC who have played nine matches. The Heroes Circle-based Wolmer’s hold a slight advantage over their opponents in the run in for group honours as they were ahead 2-1 against JC in their match which was abandoned due to lightning with six minutes remaining. The lightning struck five players, three from JC and two from Wolmer’s.

Meanwhile, Holy Trinity will take a 1-0 lead into their rescheduled match in Group A against Bridgeport at the Royal Lakes field today.

Holy Trinity were ahead in the contest when heavy rain, along with lightning, forced officials to abandon the match at the start of the second half.

The Central Kingston-based Holy Trinity lead the group with 15 points, one ahead of Cumberland. They are followed by Haile Selassie and St Jago on 11 points each and Bridgeport on 10.

Holy Trinity coach Devon Anderson said the remainder of the match today is very crucial for his team as they seek to extend their lead atop the group.

“It is a very important match for us because we need to win to stay on top of the group,” said Anderson. “Our aim is to win and so we just have to go out and ensure that we finish off the game with a victory.