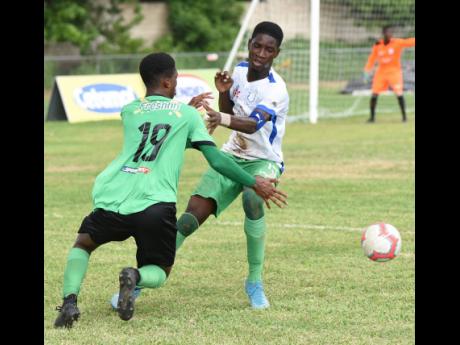 Latrae Harris (right) of Norman Manley High and Calabar High’s Tyrease Thompson in a keen tussle for the ball during their ISSA/Digicel Manning Cup match at Calabar. Calabar were leading 2-1 when the match was abandoned due to rain and lightning.

The victory has moved KC to 24 points, 12 ahead of second-place Excelsior who blanked Pembroke Hall 4-0. In the group’s other game, Cedar Grove High and Dunoon High played out to a 0-0 draw.

At Calabar High, the game between the hosts and Norman Manley High was abandoned just after half-time because of heavy rain and lightning. Calabar were leading 2-1 when the match was called off. Meanwhile, former champions Camperdown whipped St Mary’s College 15-0 to register their 11th straight win in Group D of the competition.

Camperdown, who last won the title in 1982, were led to victory courtesy of a four-timer from Shaquiel Bradford.

The East Kingston-based institution, who have scored 44 goals while conceding one, have also secured their spot in their quarter-finals of the competition.

They are followed by Hydel 13, Meadowbrook eight, Edith Dalton James and Tivoli on seven each and St Mary’s College on one.

Strength of the team

Christopher Bender, head coach of Camperdown , said his team has been moving from strength to strength as they look forward to the quarter-finals of the competition.

“This victory is not an indication of the strength of the team based on the opposition because the group is not that strong,” said Bender.

” We know that we will face stiffer opposition in the next phase of the competition, I am sure that is when you are going to see our best,” he said.

“We have not been fortunate to play the strongest team that I have in mind because of various reasons. But those people will be ready for quarter-finals and I will be able to pick from the best of what we have,” he said.