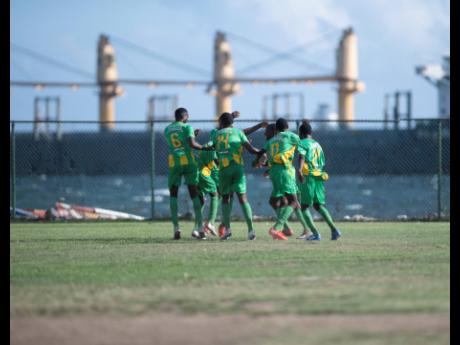 Kingston High School’s Keshawn Wisdom celebrates with teammates after netting a goal against Charlie Smith in the ISSA/Digicel Manning Cup at the Breezy Castle field in downtown Kingston, last Saturday.

K ingston High School head coach, Keith Johnson, said he has been working assiduously to improve the lives of the school’s aspiring footballers who are currently participating in this year’s ISSA/Manning Cup competition.

Johnson, who is a past student of Kingston High, told STAR Sports that there are many talented footballers within the school, but the lack of discipline and application has resulted in them failing to achieve their goals.

“They are coming from nothing, so we are just trying to highlight them and make them aware how life is because it is really life we are trying to show them, but it is taking time,” he said.

“I saw our [Under-14] team training and it is giving a lot of vibes and hope, so I believe that we are moving in the right direction. I believe that once these boys take telling and stay out of trouble, then the sky is the limit for them because they have a lot of potential.”

Kingston High picked up their first point of the season in a 1-1 draw with Charlie Smith last Saturday at the Breezy Castle field.

Johnson says the performance has given his players hope and belief that they can compete well against the best teams in the league.

“This is a big point for us because this is like history,” he said. “This is our first point from a big school in over 20 years for us.

“I think they will get there. They are still young because most of them are 14 and 15 years old. They don’t believe in themselves, but each time they play and they see what I am showing them, they kind of get that belief.

“They are a nice bunch of youths, but most them come from a background where they are used to indecent language, but they come to a coach that doesn’t use bad words and they are adopting and it is getting better for us.”