StGC ready to put final defeat behind them 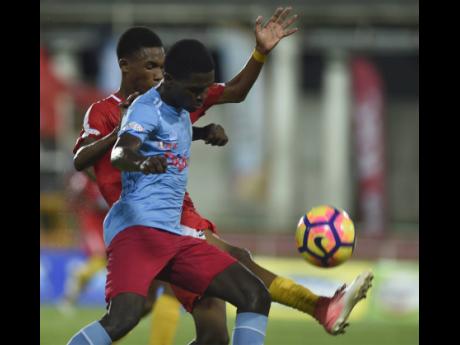 St George's College StGC will be looking to erase last year's defeat in the ISSA/Digicel Manning Cup final when they kick off their campaign for this edition of the competition today against Eltham High School.

The Neville 'Bertis' Bell-coached unit has shown signs that they have already started to put the stinging 3-2 beating in the final by Kingston College behind them by easing past their North Street neighbours 1-0 in the Roper Cup on August 31.

And they are looking to continue that trend today at Winchester Park.

"We are expecting a keen contest from our opponents, because Eltham always give us a tough match," said Gayle.

"The objective is to always finish strong, but we are humbled and we are going to take it one game at a time and hopefully, we can grow from strength to strength."

The Light Blues have retained 60 per cent of their players from last season and could be very difficult to beat season.

Among the players that St George's have retained are Nathaniel Campbell, Jahiem Brown and Orville Smikle. They have had a good preseason, having defeated Manning Cup champions Kingston College 1-0 in their Roper Cup encounter on August 31.

In the group's other games, Calabar will host Norman Manley and Campion College entertain Ardenne.

STATHS, who will be seeking their first title since 1987, are once again expected to go deep in this year's competition, having made it to the semi-finals last season, where they were knocked out by eventual champions Kingston College.

In fact, the Phillip Williams-coached STATHS, who have been one of the most consistent teams in the competition is the past five seasons, were beaten by Jamaica College in the 2017 final.