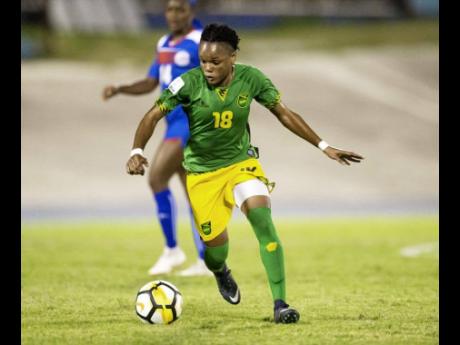 Reggae Girlz midfielder Trudi Carter says she is recovering well from her knee injury and she should be fit in time for the FIFA Women's World Cup tournament in France next month.

The tournament will be held from June 7 to July 7.

"It is going great and everything is going smooth now," said Carter. "At first, everything felt like it was going left but it is going good now."

She continued: "I didn't know what to expect because it is my first time going through all of this. I reached out to one of my family members who went through something similar, knee injury, and he was the one that kept me calm and told me everything is going to be alright and I will be back out on the field as soon as possible."

The 23-year old , who plays professionally in Italy with AS Roma, has been struggling with a knee injury from the final round of the CONCACAF Championships and could only be featured in the group stage of that tournament.

However, Carter's performance through qualification caught the eye of Italian club Roma, who offered her a contract. But weeks after joining Roma, Carter went down in October with knee trouble and has been out since.

Carter added that her mother has played a big part in career and especially through these challenging times and so she is very grateful to her for that.

Everything is my mom because after leaving South Florida things weren't going the way I wanted it go and so I was like what I am going to do, what is my next plan and she kept saying your dream is to play professional and it is going to happen," said Carter.

The Reggae Girlz, who are ranked 53rd in the world, are drawn in Group C alongside Australia, Brazil and Italy.

Carter noted that all the teams in the group are good, but once they do what they have to do the day then they will get a positive result.

"These teams that we are playing against Australia is number five in world, Brazil is number 10 and Italy is like 16 and we are number 53, the lowest in the group and we are like the underdogs, but I love being the underdogs and so it doesn't matter," said Carter.