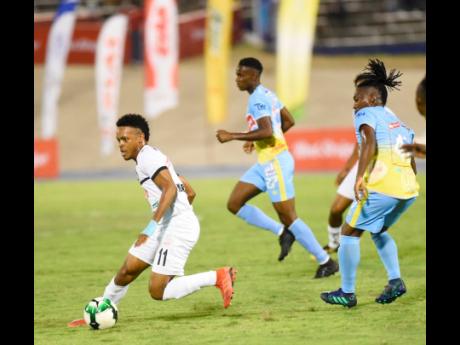 Cavalier FC’s Alex Marshall (left) on the offensive against Waterhouse’s FC’s Keammar Daley (right) during their first leg Red Stripe Premier League semi-final game at the National Stadium on Monday, April 8. Waterhouse’s Andre Leslie can also be seen tracking back in the background.

Having been on two unsuccessful trial stints, Cavalier FC midfielder Alex Marshall he is very hopeful that he will be able to secure an overseas contract very soon.

The 21-year-old Marshall returned to the island last month after his one-month trial stint with top-flight Greek club Aris Thessaloniki was cut short.

Marshall told STAR Sports that he did not know why his trial was cut short, as he did not even get a chance to train with the club.

"I went over there with the mindset to train, but it didn't happen, so I just have to continue working and hopefully something will work out soon. so I am just waiting to see what happen," he said.

"I am a bit anxious (to go overseas), but I am just patiently waiting on my time. I am just looking forward to the rest of my career and seeing what the year brings," he said.

Marshall, who has seven caps for the national team, was left out Jamaica's side for the CONCACAF Nations League game against El Salvador on Saturday, March 23, and the friendly international game against Costa Rica three days later.

He added that he is hoping to secure a spot in the national team for the upcoming CONCACAF Gold Cup tournament.

"I am hoping going to do my best for the Under-23 team and see if I can get a call-up for the senior team," Marshall said. "I would love to go to the Gold Cup, but I am just waiting to see what happens," he said.

Marshall, who netted 10 goals for Cavalier while helping the club to reached the semi-finals of the Red Stripe Premier League, said this season was a much better one for him compared to last year.

"I think that this season was much better than last season, except for the semi-final where I got some chances but I didn't score to help my team win both games," he said.

Cavalier was beaten 3-0 on aggregate by Waterhouse in their semi-final clash.