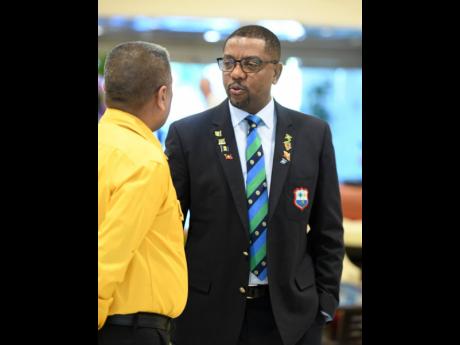 (From left) Anand Sanasie, a director of the Guyana Cricket Board and former Cricket West Indies (CWI) president Dave Cameron talk during the CWI Annual General Meeting and elections, held at The Jamaica Pegasus hotel, yesterday.

Former president of Cricket West Indies (CWI) Dave Cameron said he was letdown by the delegates, who broke their promises to him at the association’s Annual General Meeting (AGM), which was held at The Jamaica Pegasus hotel in Kingston yesterday.

The Jamaican, who was seeking a fourth term as head of the governing body for cricket in the region, lost 8-4 to Ricky Skerritt during the AGM.

Cameron told STAR Sports after his defeat yesterday that he was shocked and saddened by the outcome.

“I am very disappointed that men gave me their word and went another way, but that is election,” said Cameron. “I think we have a lot to be proud of, winning the Wisden Trophy after 10 years and seeing us competing against England the way we did just now and so I tell you I am very excited for West Indies if we continue on this on path.”

A LOT TO IMPROVE

He added that during his time in office his administration have done a lot to improve the state of cricket in the region and therefore he is very proud of his achievements.

In the meantime, the 62-year-old Skerritt said he was elated but surprised by his margin of victory yesterday.

“I don’t know where the eight votes came from, but what I can tell is that everybody has the right to privacy with their vote and I am simply very grateful that we were able to get eight votes and that was more than a one vote margin,” said Skerritt.