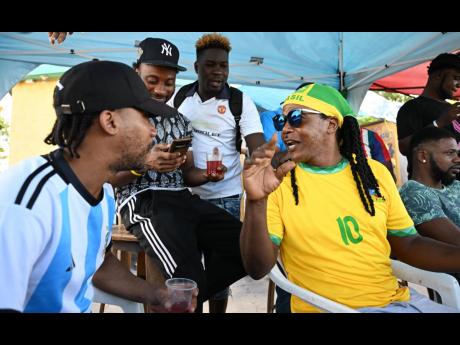 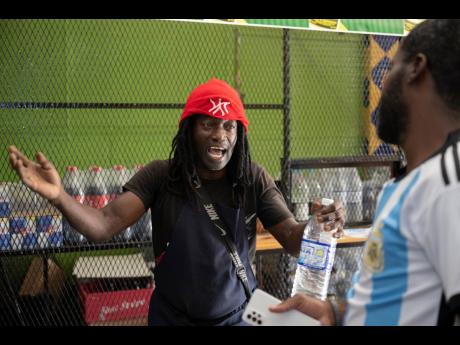 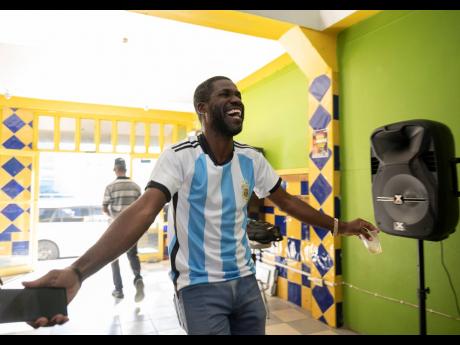 Argentina superfan Roxroy McLean is having the time of his life. Will he have the last laugh? 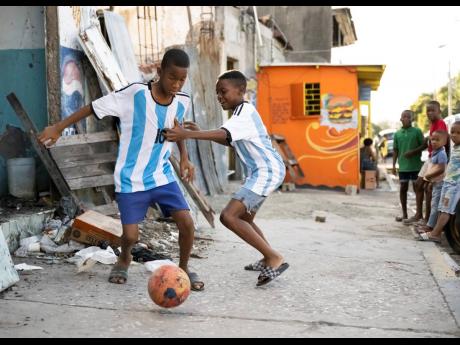 The next generation of Argentina supporters, 13-year-old Andre Burke (right) and 12-year-old Emanuel Clarke, match skills along North Street in Kingston on Saturday. 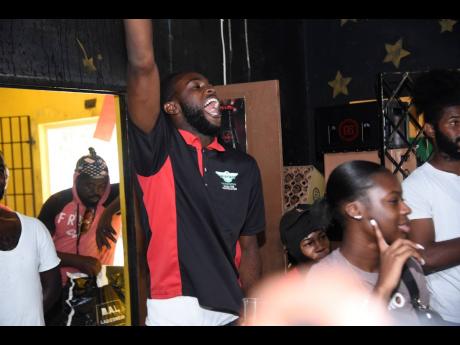 Even though his team was not involved, Brian Thompson, an Argentina supporter, rises high inside Miami Voice HQ, Dreamland Drive, Old Braeton, St Catherine, to celebrate Cameroon’s win over Brazil on Friday. 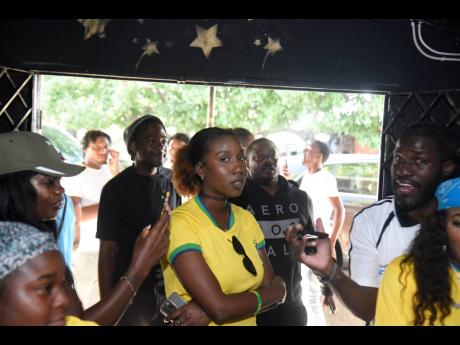 Shanel Lemmie, like so many Brazil supporters, lost her voice after Cameroon dropped the Bob Marley. Jamaica was unusually quiet all weekend. 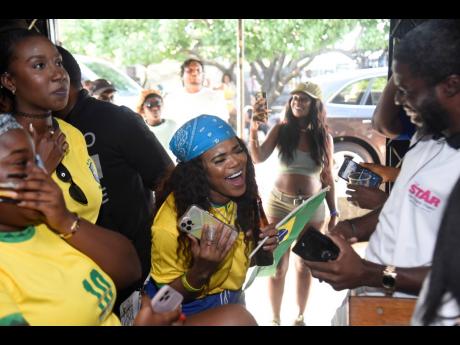 Queen Nikki (foreground) cried out for Jesus after the Cameroon stunner. 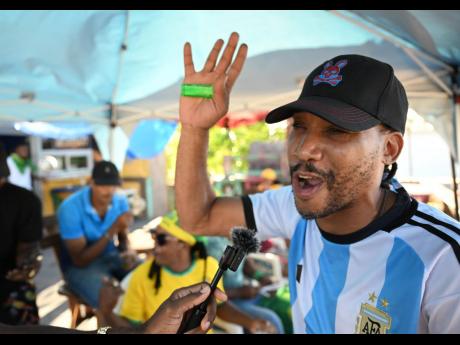 Always outnumbering rival fans, the local Brazilian supporters have been getting an earful from their naysayers since Friday's shocking loss to Cameroon in their final group game.

Swiftly dismissing Tallman's utterances, Nickeisha 'Queen Nikki' Haye, who was decked out in her full Brazil attire, said "yuh no have no sense, yuh no see say a Brazil B side this a play."

Title contenders England, France and Argentina have already made progress to the quarterfinals, and if Brazil is to join them, the Samba Boys must get past a gritty South Korea today.

The look of the faces of the Brazil fans betray the lack of confidence they have in their team. Having been brought down to reality, their continued existence in the competition is based in hope more than optimism.

On Friday, Tallman was not to be silenced by the fury of Brazilian support. "Before the game unuh mek big talk say any side Brazil play affi win, so weh di affi deh?" he rebutted.

Rocked by the defeat of their team, many Brazilian supporters appear to have lost their voices. My Cheer to the Cup co-host, Shanel Lemmie, is among those pretending not to be worried. Like she has done throughout the competition, Shanel has turned the focus on Messi's men.

"I am just here for Argentina's sending-off party," teased Shanel as the team turned up at Thompson's New Look Bar in Union Square, Cross Roads, St Andrew, on Saturday.

She not only had to eat her words but was forced to consider the distinct possibility that Neymar's side could bid goodbye today.

Taylor said that the gods will ensure Argentina win the final on December 18 by 2-0.

"It no matter a who wi play because Argentina have the greatest baller of all time. Yuh can put on a pot because this World Cup is a soup," he declared.

Assuming Brazil make it to the quarterfinals, they have to get through Argentina to make it to the final. Based on the way the fixtures are made up, the South American giants only meeting in Qatar would be in the semis. If the gods have indeed decided Argentina will win, according to Taylor, Brazil's fate have already been decided.

France, the reigning World champions, eased past Poland 3-1 to set up a date with an high-flying England side, but France supporter Marie Marsh, of Salon Emporia in Half-Way Tree, St Andrew, said she is not bothered by any team.

"Mi no wah Argentina and Brazil drop out because wi a go beat one a dem inna di finals. France understand what to do, so me nah worry bout dem because we have the thing lock. Remember, enuh, a wi everybody wah defeat because a wi a di champion, but right now mi see all a dem as toddlers. I don't want to be disrespectful and call dem babies but to me, Brazil and Argentina are like toddlers to France," she said.