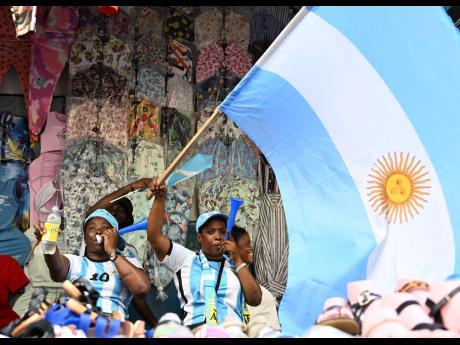 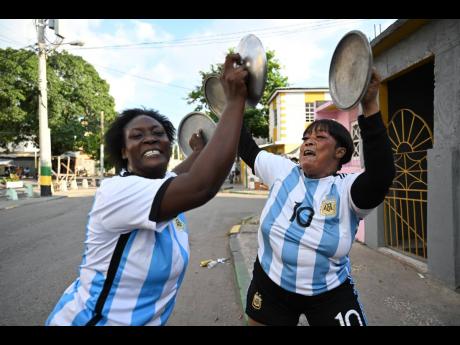 Kerry (left) and Shelly, residents of Tivoli Gardens, beat their pot covers in celebration after Argentina defeated Poland to advance to the knockout round of the World Cup. 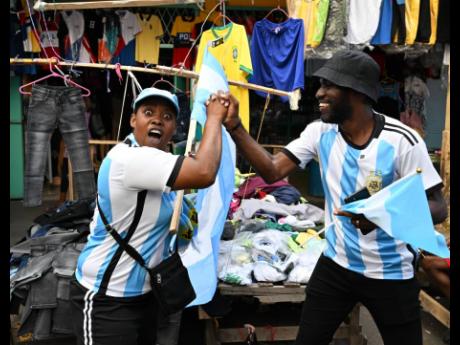 Die-hard Argentina fans Kadeen Richards (left) and Cheers to the Cup co-host Roxroy McLean are united as their team advanced. 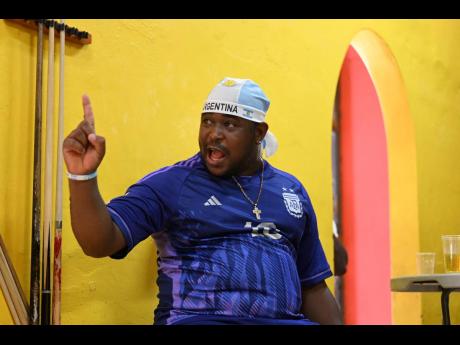 Jermaine Allen takes in the Argentina-Poland match at Dat A Tru Bar in Tivoli Gardens, Kingston.
1
2
3
4

Argentina may have fewer support in Jamaica compared to arch-rivals Brazil, but there are some die-hard 'Albiceleste' (sky blue) fans who will go beyond the ordinary to prove their passion and love for the South American giants.

One of them is Kadeen Richards, a popular street vendor who operates her business on Beckford Street in downtown Kingston. Richards claims that she was instructed by God to go on fasting and will continue until December 18 when the World Cup final is played. She revealed that God declared to her that the ritual will help Argentina's chances of winning the tournament.

"One straight month mi say! Two times a day mi pray, at 12 midnight and 6 every morning and this a go straight to December 18 when the god (Lionel Messi) lift the World Cup," said an ecstatic Richards, minutes after Argentina secured progression to the round of 16 yesterday with a 2-0 win over Poland.

"A faith and prayer the general ask fi wah? Him say wi have faith in him. Wah more wi need fi hear?" emphasised the veteran higgler.

Richards, who infamously failed in her attempt to 'guzzu' Brazil while they played Serbia in their opening game, was at the centre of celebrations yesterday with several other jubilant fans. She was jumping and screaming at the top of her voice, all the while glancing at the tiny tablet she took from her daughter in order to watch the match.

"The bredda weh bring out the TV say him never did a go forward, enuh, (referring to a popular spot downtown). Mi call him Wednesday morning when mi a look fi leave out and him tell me. So me say mi cyah miss this match fi nutten at all. So me tek mi daughter tablet and put on a three-day service so dat mi can tek in mi side," said Richards, a mother of two.

The excitement on Beckford Street was equally matched at Dat A Tru Sports Bar in Tivoli Gardens, Kingston.

"Yuh a go see who have the last laugh when the match done," said Bryan, moments after Lemmie began to 'mouth' them when star forward Lionel Messi missed a penalty.

"Di god (Messi) just a warm up," reassured Allen, despite looking concerned. I, too, was caught up in the madness and at times lost my sense of focus as a host.

I was very immersed into the action and, on one occasion, found myself hugging and chanting with a group of women after Argentina's second goal. I almost lost my watch during the process.

But there was pandemonium at the final whistle as Argentina, despite losing their opening game to Saudi Arabia, topped Group C and will now face Australia in the second round.