Mother longs to take family out of poverty 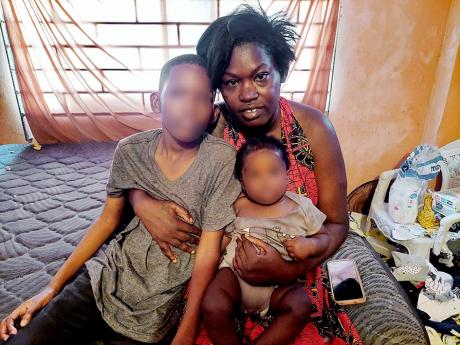 Terry Ann Stewart and her sons.

When Terry Ann Stewart and her small family moved from Smith Lane to nearby Sutton Street in central Kingston approximately two years ago due to a family squabble, she thought life would be better.

But that hasn't proven to be the case as Stewart and her husband are finding it difficult to make ends meet. They currently occupy a room in a building that was formerly a business place. Church members and a good Samaritans from overseas assist the family with the $6,000 rent. Stewart said her husband has been out of a job for close to two years because of the continuous war among gangs in the area.

"He was a supervisor at a security company, but because of the war in the community, he had to stop. His nephew was killed in this war also. They went to my husband workplace two times and shoot after him. He is very ambitious and hard working, and he is not involved in any war, but him just can't go certain locations to work. But right now, him a look work hard," she said.

Despite their financial situation, their older son, who is 10, has been doing well in school, getting straight As in primary school, and he is hoping that his education will uplift his family.

"I want to take my mother out of poverty, and sometimes she go through rough times and have to go and hussle a $100. Sometimes people insult har and mi feel bad, so mi really a go do mi best to make it for her. One day mi a go be a soldier or a NFL player, and mi a go can help har. Mi study hard and a bare 90s grade mi get. Sometimes when mi get one wrong, mi cry," he said.

Although a zone of special operations remains active within sections of central Kingston, the bloody gang feud has been holding many residents hostage. Stewart said she is extremely grateful that her son is able to beat the odds and remains at the top of his class despite being jolted out of his sleep by the sound of gunshots almost nightly.

"Sometimes when the shot dem a fire is under the bed we have to go and seek refugee. Sometimes him tell mi say him want we fi move, but him know we cannot afford it right now. Mi worry about him because him don't even play or have friends. Him use to have friends, but him afraid to go outside and play because of the war. Mi really want to move from here suh," she said.

Stewart said she is not looking for handouts and is seeking the public's assistance in securing a job to provide for her family. She said she looks forward to her son attending university and is hoping to secure a job to save for his tertiary education.

"A nuff time mi nuh have lunch money for him, and mi have to walk from overnight and beg and I don't like it ,enuh because is my children and they are my responsibility. Plus, mi is a married woman, and when yuh married, yuh nuh suppose to beg. Mi don't have a fridge or a stove. Sometimes is mi mother-in-law have to leave all the way from Harbour View come give us food, and it don't look right because she is 80 years old. We should be the one helping her. Mi just want some help to get a work. Mi will do anything," Stewart said.

Her older son's eyes welled up with tears as he showed THE STAR a notebook, which he said contains the names of all the persons who had assisted him and his family in any way.