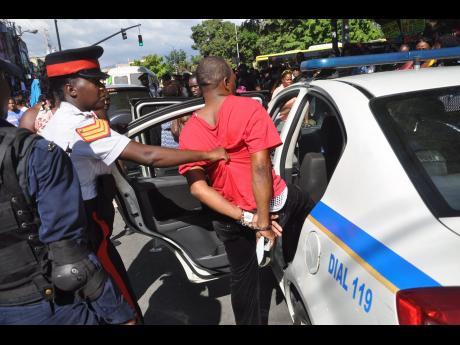 In this 2014 photo, a man is being arrested by the police for allegedly committing a crime.

The police have confirmed that Glenroy ‘Elephant’ Gayle, a Westmoreland fisherman was arrested and charged after he allegedly attacked a man in a shop on Great George Street in the parish.

It is reported that Gayle and two other men, attacked the victim over allegations that he set a grocery shop on fire.

The incident happened on Monday, November 14.

The police report that about 7 a.m., a man was purchasing items at a grocery shop when the three men, including Gayle, entered the shop accusing the victim.

The three then allegedly assaulted the man, inflicting several blows and wounding him, according to the police.

They then fled the scene.

The man was assisted to hospital where he was admitted in serious condition.

Gayle was apprehended at his home on Wednesday during an operation and was subsequently charged.