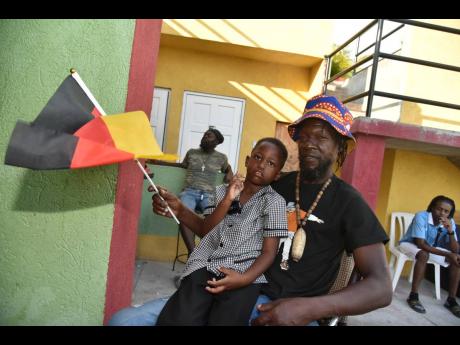 Ralston Bogle and his son Twayne taking in the World Cup at Reggae Fountain Restaurant. 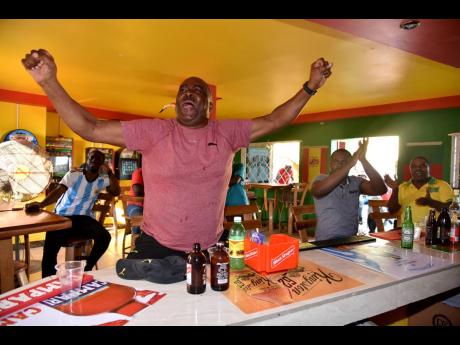 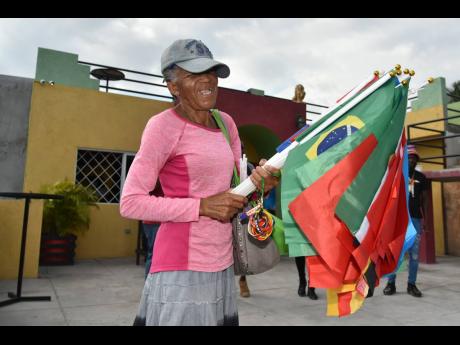 Millie stopped by the Reggae Fountain Restaurant on Tuesday during the France and Australia game to sell flags and wrist bands.
1
2
3

With just two touches on the ball, five-year-old Twayne showed just why his father Ralston Bogle has been investing so much time in helping him learn the 'beautiful game'.

Ralston, a proud supporter of Germany, said he is hoping that his football-loving child has inherited his 'touch'.

But there was plenty of evidence of Twayne's affinity for the sport as our news team observed his footballing skills at the Reggae Fountain Restaurant in St Andrew. Twayne, although he struggled at times to maintain steady count during a self-imposed 'keep up challenge', displayed deft touches on the ball that warranted attention. While maintaining a firm grip of the Germany flag in one hand, he manoeuvred around with agility and purpose, almost as if he was mimicking the movements of the game he watched earlier.

"He is a likkle man weh like the football game. Yuh see from the World Cup start, every likkle weh wi go and wi see a TV, wi just stop and gwan watch the game," the proud father emphasised.

Ralston, who also has two girls, said that Twayne's choice to support Germany was an independent one, even though he admitted that the boy has developed a habit of trying to emulate what he does.

"Me is a supervisor at a car wash and when mi have him deh wid me, yuh fi see him a wash car. Him help mi do everything, trust me. Him never come see me a play ball but people a tell him say 'Yuh father a baller and ray ray', and when him come a mi workplace, him would see mi juggle football a one or two times same way," he said.

Meanwhile, the atmosphere inside the restaurant and bar occasionally went to fever-pitch while defending champions France eased to a 4-1 victory over Australia.

Although neither Brazil nor Germany were playing, the vibrant discourse was mainly about the two footballing powerhouses' bitter rivalry.

A Brazilian supporter drew the ire of a German fan when he said his team would avenge the 7-1 humbling they received in 2014 on home turf.

Their fiery debate was later settled in three rounds of a makeshift penalty shootout, which the 'German' won.

The proprietor of Reggae Fountain Restaurant, Bernard Simpson, said he was putting his faith in England because of the many Jamaican connections within their squad.

"See true Raheem Sterling a play for them, mi a bring England fi win the World Cup," he said, but his utterances were scoffed at by a rather animated group of Argentina fans.

Speaking of Argentina, a supporter, who was donning his sky blue and white jersey, was flatly dismissed when he uttered a rallying cry following the South American giant's abysmal showing against Saudi Arabia hours earlier.

"Inna 1990 when Argentina lose dem first match, they went on to win the tournament so mi nah worry bout today's defeat. A better mi lose from early," he exclaimed. For the record, Argentina was the runner-up that year.