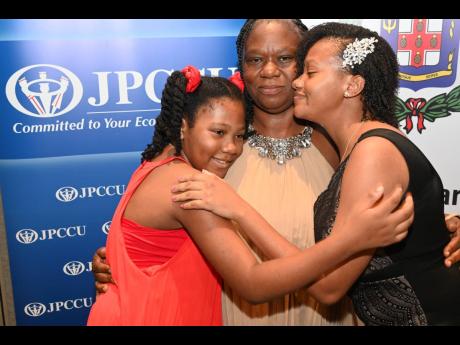 Michelle Townsend-Harper, (centre) widow of Inspector Rupert Harper and her children Sarai (left) and Jadyn Harper embrace at the Commissioner’s Luncheon for Children of Fallen Officers at The Jamaica Pegasus hotel in New Kingston on Tuesday. Inspector Harper died on February 5, after falling ill on the job.

Behind her faint smile, Michelle Townsend-Harper's face conveyed a picture of grief.

Townsend-Harper is the widow of Inspector Rupert Harper, who died suddenly while on duty on February 5. Harper was reportedly quelling a dispute in Lawrence Tavern when he collapsed. He was 50. The mother of two was among 30 families who were invited to the Commissioner's Luncheon for Children of Fallen Officers at The Jamaica Pegasus Hotel on Tuesday.

Jadyn, 17, and Sarai, nine, the couple's children, miss the dates to the ice cream shop with their father for birthdays and weekends.

"We would do gardening together and I miss when he would take me to school and pick me up. We bonded during that time. When I was younger, he would allow me to play music with him. He would play the keyboard and I would sing. It was like our little band together," Jadyn shared. Sarai also looked forward to their weekend hikes.

It was also a family tradition for the group to watch the fireworks on New Year's Day or bask in the breathtaking view of the city from Birdsucker Drive in St Andrew.

"I don't really have a clue what we are going to do this year because he was the planner," Townsend-Harper said. Still reeling from the loss of her partner of more than two decades, she lauded Harper as a provider, one who cared for the well-being of others, and the consummate police officer.

She reflected on receiving the heart-rending call that relayed her husband's demise. It was two days after her birthday.

Townsend-Harper said that although she did not tell her husband verbally that she loved him before he left for work that day, the intimate stare that they shared before he left confirmed the affection for each was strong.

"When I got the call, I was hoping that it was not true and I said 'God, if I go KPH (Kingston Public Hospital) and see him, me a go jump on him and bawl'. I said 'God, bring him back.' But when I got to KPH, he was already at the morgue," the grieving woman said, her voice cracking.

She told the news team that it has been a rough nine months since his passing.

"The children depended on him for protection and provision. He was dependable," she said.