Germany supporter sounds warning - ‘Any side buck up inna Germany a guh dead!’ 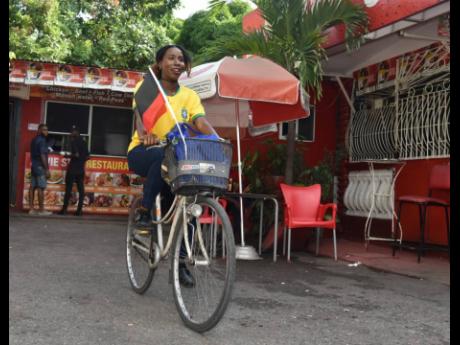 Reporter Shanel Lemmie, a Brazilian fan, take this German-owned bicycle for a ride outside Movie Star Lounge, located on Omara Road in Kingston. 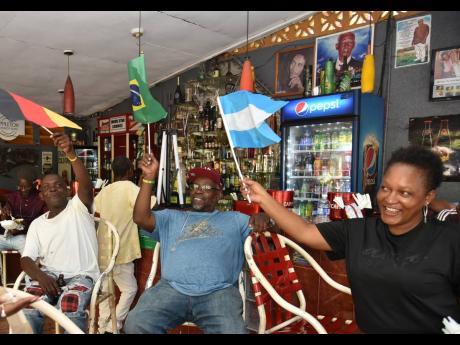 German supporter Martin Powell (left) enjoys the greatest show on Earth with his friend, Blindz (centre), a Brazilian supporter, and his wife Laurie-Ann, who supports Argentina. 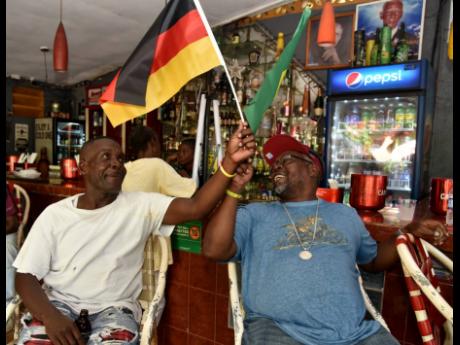 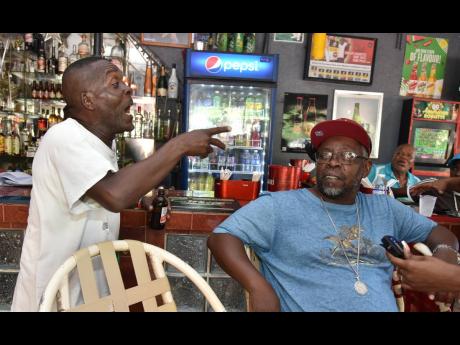 German supporter Martin Powell making sure that his ‘Brazilian’ friend, Blindz, does not forget the 1-7 humiliation of eight years ago.
1
2
3
4

While the Welsh and US teams battled it out on the pitch in Qatar, another battle was brewing at the Movie Star Lounge, located on Omara Road in Kingston.

Long-time Brazil supporter 'Blindz' was resting comfortably next to his wife, Laurie-Ann, and hoping that his adopted homeland, the USA, would take all three points off Wales. Blindz was enjoying the game until Martin Powell rode in and ruffled his feathers in a way only Germany fans can.

Returning to one of the most forgettable day in Brazil's football history, Powell reminded Blindz that the Samba boys suffered the largest margin of defeat in a FIFA World Cup semi-final when they were beaten 7-1 in the 2014 clash. The dominant Germans scored four goals scored within six minutes, and led 5-0 before the half-hour mark.

However, Blindz said he has already put the 2014 mauling in his rear-view mirror.

"So inah all the years, a one match unuh a talk bout?" said Blindz in a sharp retort to Powell.

He ignored the fact that his wife was flying an Argentina flag, a decision she made for this World Cup after her team, Italy, failed to qualify. Instead, Powell was on his radar and he was determined to silence him in the bar and on the pitch.

As the fierce argument raged on, the captivated patrons only barely noticed when Welsh striker Gareth Bale scored the equaliser in the 82nd minute. Tim Weah's first-half opener gave the United States the lead in the 36th minute.

Ever the set-on, I offered to buy drinks for the Brazilian supporters in the house. I was even prepared to consider offering a sip to new converts but die-hard non-Brazilian fans looked past my distinctive Samba style T-shirt and saw straight through me.

"We nuh wah nuh drink from nuh Brazilian," one Argentina supporter shouted from the wings. His voice was quickly drowned out by the barrage of Samba fans who had entered the establishment. A vendor, spotting the opportunity to make sales, waltzed in with merchandise. After about two minutes, every green and yellow flag that he entered with had a new owner.

Powell, though, was unperturbed. For him Germany will win the World Cup and he will get yet another opportunity to taunt his friend of over 20 years, Blindz.

And as much as Powell pretends to be anti-Brazilian, he allowed me to mount his German machine, which I took for a quick spin. However, the odd sight of a Brazil fan riding a bicycle marked for Germany caused quite a stir. Both laughter and shouts of contrived anger came from inside the lounge. Some Samba fans even questioned my allegiance.

The South American giant is set to play their first match of the tournament on Thursday against Serbia, while the Germans will grace the pitch a day earlier against Japan.