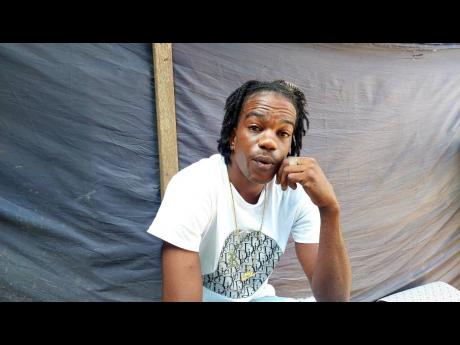 Ramone Silvera expresses remorse for his actions during Monday’s strike by bus and taxi operators.

Ramone Silvera, the professional clown who was confronted by the serious face of law enforcement hours after he was seen in a viral video ordering passengers out of a taxi in downtown Kingston on Monday, said he regrets his actions.

A bewildered-looking Silvera was taken into custody hours after he showcased a tough face while wielding a piece of board as he seemingly threatened commuters who had hopped into a cab. The 32-year-old Silvera appeared determined to ensure they suffered the effects of a strike by transport operators.

However, he soon became the butt of the jokes hours after photos that appear to show him in a disconsolate state, while in the custody of the police appeared on social media.

Yesterday, when THE STAR visited Silvera at his Kingston 11 home, following his release from custody, he blamed his behaviour on the consumption of an excessive amount of alcohol. Appearing sombre, Silvera said he was sorry for the way he conducted himself.

"It wasn't pleasant when I looked back on it because the ladies could be my mother, sister or babymother," said Silvera said as he reflected on Monday's incident.

"Mi really feel a way because when mi think bout it, mi could a deal with better than how me deal with it, but under the ignorance di thing get blow out of proportion," he added.

He has been charged with assault at common law, disorderly conduct and indecent language and is set to appear at the Kingston and St Andrew Court on January 12, 2023 to answer to those charges.

He said that while the photos that have appeared online give the impression that he was singing the blues, that was not the case. According to him, he had got a bit tired of cops using him for entertainment value. He stated that at one point the police were behaving "like a some joke thing and drama class dem deh pon".

"Dem a tek mi picture and same time mi hold down my head and say mi nah mek unuh tek me picture. The police man seh same as how me can deal with the people dem, him a guh tek mi picture and send it out," Silvera said as he sought to explain the unflattering photos.

The jester said he believed the police intended to embarrass him by releasing information that he is a professional clown. But he expressed no shame for what he does for a living.

"I am a clown, and that is what I do for a living. I rent chair, bounce-about, and all of those stuff. That is my thing weh mi can say a it me mek mi money off. So when mi hear dem ago say me is a professional clown, a that me do for a living. Mi keep treat for the children. So when dem a spread like say is a laughing stock dem wah turn me inna, mi nuh watch that because dat cannot stop me from do weh mi a do," he said.

Silvera was among stakeholders in the public transport sector who staged a protest on Monday to press their claim for a traffic ticket amnesty or payment plan from the Government. The operators risk losing their driver's licences if they fail to pay outstanding traffic tickets before December 1.

Silvera, while admitting that many of his peers have been reckless on the roads, said the call for the amnesty is a genuine one.

"Mi nah go lie still because 95 per cent of wi abuse the system and we drive really dirty and neglectful at times. But at least every man deserves a second chance. A better yuh talk to a man and say a better yuh nuh do that again or something. But it look like dem wah just take away the licences and decide say a it that. Hungry a guh kill wi, bills a guh pile up on us because many of us don't have another income," he said.