Road deaths projected to be second highest in history 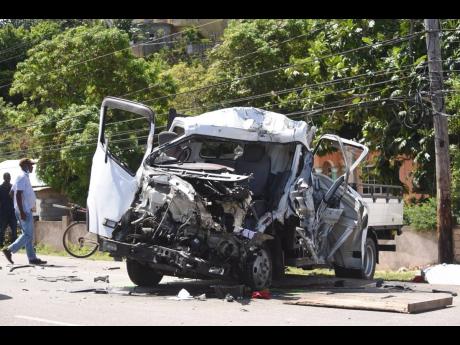 A road crash in St James.

"There are about 70 people who are alive right now that will be dead on December 31st," is the startling revelation declared by Dr Parris Lyew-Ayee, vice-president of the Private Sector Organisation of Jamaica.

A staggering 392 persons have died in 340 fatal collisions on the nation's roads as at yesterday. A record high 487 road fatalities were recorded last year. Fatalities have decreased by two per cent while fatal crashes have decreased by five per cent when compared with similar period in 2021. The Road Safety Unit has projected that road deaths will reach 467 by year's end, making it the second highest in the country's history.

"Regrettably, data analysis shows that we are on a trajectory for 460 to 470 road fatalities this year," said Lyew-Ayee, who was one of the presenters at the Red Stripe Corporate RESPONSIBILITY NOW! virtual town hall series.

The panellists were Assistant Commissioner of Police Gary McKenzie, head of the Constabulary's Public Safety and Traffic Enforcement Branch; Kenute Hare, director of the Island Traffic Authority; promoter PJ Wright; and Everton Styles, president of the Jamaica Association of Transport Owners and Operators.

Lyew-Ayee shared that in June he predicted that road fatalities would brush against the 500 mark, and commended the authorities for bending the curve. Nonetheless, he said more needs to be done to drastically reduce the number of road deaths.

"We have to focus on the people who are alive and keep them alive," he stressed, noting that the current statistics are worrying and meant that every 19 hours a persons would become another recorded road fatality.

His sentiments were echoed by J.C. Hutchinson, state minister in the Ministry of Transport and Mining, who urged residents to be responsible road users.

"We still have 52 days to go in the year and I don't want to think what the count will be," the minister said.

Meanwhile, the Desnoes and Geddes Foundation presented with 50 breathalysers machines, valued at more than $3 million, to the Jamaica Constabulary Force, in support of its efforts to enforce road safety ahead of the heavy consumption and party season.