Driver in eight-vehicle crash had 120 tickets 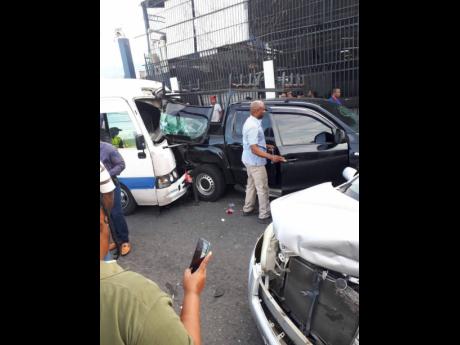 The bus which featured in the eight-vehicle motor vehicle crash on Constant Spring Road on Tuesday morning.

In a dashcam video acquired by THE STAR, a Toyota Coaster bus can be seen barrelling into the back of a Volkswagen pick-up truck that in turn ran into other vehicles.

The accident caused a heavy build-up of traffic on Constant Spring Road for several hours forcing the public to take alternate routes. Further lamenting the importance of the new electronic ticketing system, Anderson said this incident exemplifies the need for real consequences to traffic infractions.

Speaking at a press conference on Tuesday afternoon, the commissioner said "This is a point that I have been making in this business of what happens on our roads. Until when the police issue these tickets it matters, we will continue to have these people do all kinds of things on the road."

He continued, "We had some discussions recently about when the new regulations of the Road Traffic Act comes into force and the other challenges there are in the system to get the proper consequences associated with breaches of the Traffic Act. The police can write tickets and we write tickets as per what we are allowed to do. And when there is a warrant we go for the person who does it."