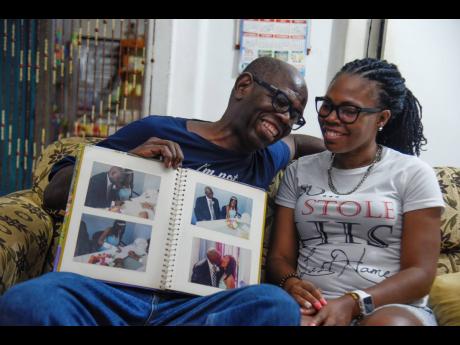 Lloyd and Latoya Jones say that breast cancer has not affected their love life. 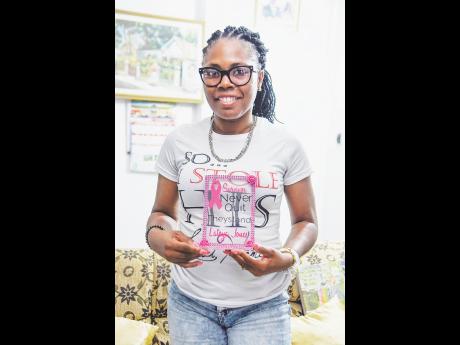 Latoya Jones poses with a cancer survivor gift from one of her friends.
1
2

After 16 years together, 11 of which they've spent in marital bliss, nothing has disturbed the sexual synergy that Lloyd and Latoya Jones share, not even breast cancer.

"When we had sex for the first time [she was diagnosed in 2002] nothing was explained," Lloyd recalled. He told THE STAR that it was after their second time being intimate that she confessed to him that she had stage two breast cancer.

"It never felt like she was sick or anything. I lifted her up. I did as people who like sex did, I turn her upside down and so on," Lloyd joked.

"Cause 'that' never sick!" Latoya happily interjected referring her lady parts. The Jones's were guests at the Live with Flair luncheon yesterday, which annually celebrates breast cancer survivors. Latoya explained that it was always a priority for her to maintain being sexually active regardless of her diagnosis.

The couples shared how even after Latoya's cancer developed to stage four and her symptoms worsened, they were still very sexually active.

"When I was sick that was the time I crave for sex more. I craved for the weirdest things," she said.

Lloyd further explained, "During that time we'd have sex far, far more often. She had seizures too, enuh, some terrible seizures. And sometimes she get up out of the seizure and we'd make love and then she get another seizure and she nuh member nothing."

While Latoya is still undergoing treatment for her breast cancer, she said talking about her sex life and maintaining the same level of intimacy with her husband has been a driving force in keeping a smile on her face during this battle.

"I would advise women that your sex life is important in your relationship because a lot of people think once you have this disease, your sex life is ended. A lot of people, they start throwing up themselves, they not dressing appropriately. You have to put yourself together because before you were sick, you usually put yourself together," she said.

"Just mentioning the sex, a lot of people feel turned off like they are saying it's their private business, they don't want to talk about it. But in reality, the moment you open up and talk about it, it should bring upliftment to somebody who is going through the disease and think that because you're sick you shouldn't enjoy your partner."

Lloyd gleefully added, "Sex is not the icing on the cake, enuh, is the cake."